Surface quality is a deciding factor in the production of strip steel. Accordingly, automatic strip steel inspection has been a hot subject since the mid-1980s, a field in which the steel industry around the world has invested over $1 billion ­ with comparatively little success. The reason are the high demands made of such a system (40m2 of surface to be inspected per second, defect sizes as small as one tenth of a square millimetre, defect variation and subtlety, e.g. scales, roll marks, slip marks, etc.). Current technology approaches are only partially capable of inspecting the entire material. They are also pressing the limits of their performance and can no longer be enhanced to keep pace with annual production increases of about 10 per cent. Furthermore they report a number of defects which are not quality related or which are falsely recognised defects, so-called pseudo defects. Because of this, another evaluation and sort of the defects must be done manually by an inspector. In turn, this often requires that rolling mill speeds be reduced, causing production capacities with a value of hundreds of millions of dollars to go partially unused.

The new HTS-2 (see Plate 1) surface inspection system from Parsytec claims it is the world's first 100 per cent software solution for this application. The system integrates neural networks for defect classification, innovative application of brightfield and darkfield illumination (Parsytec has applied for a number of patents on this) and area-scan cameras. This allows entire sections of strip to be imaged at optimal quality levels, which are also processed as complete units. Better surface fault visibility is achieved this way, ensuring correspondingly improved inspection results. Parallel computers, based on standard Pentium II PCs, are used for the on-line processing of recorded image material. 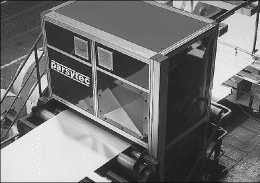 Because a software based approach was used, the Parsytec HTS-2 is flexible enough to automatically inspect strip steel in all phases of production ­ from hot mill right on up to cold rolling processes like pickling, annealing and coating ­ and do it all at any production speed. The HTS-2 achieves substantially better recognition rates than other systems currently in use. The system is capable of reliably detecting and classifying relevant defects in real-time across the entire strip steel surface. Classification includes defect form and size and is expressed in the industry's traditional production specific terms.

Aside from exacting quality evaluation of the strip steel, this allows for a localisation of defect sources. This means that repetitive defects caused by production faults can be found immediately and alleviated.

Altogether, the Parsytec HTS-2 opens up a new path to continuous process optimisation and represents a mid-term means to markedly increased total productivity and margins.

As a 100 per cent software solution, the Parsytec HTS-2 can be upgraded for any function at any time. This means, for example, the system's adaptation to higher speeds or camera resolution as well as the integration of new defect types. Therefore, in contrast to other current systems based on specialised hardware which becomes, rapidly obsolete, the HTS-2 will still be at the leading edge of technology years after it was initially installed. Additionally the consequent use of standard camera and hardware components as well as short installation times caused by the software solution make Parsytec HTS-2 considerably more economical to purchase and operate than other currently available inspection technologies.

The Parsytec HTS-2 product family is the result of a three year development and extensive field testing in co-operation with the world's second largest steel producer, POSCO (Pohang Iron & Steel Ltd), where in June 1997 a strip steel inspection project in the cold rolling mill was successfully completed.