Bognor, UK-based Solartron Metrology, a leading manufacturer of gauging probes, has developed its range of digital probes which is complementary to its new linear encoder. An advancement on the supersonic Solartron LVDT, as used on Richard Noble's Thrust SSC, the digital probe offers absolute measurement accuracy, enhanced linearity and allows flexible fixturing and reduced set-up time all at a low system cost, Solartron claims.

The digital probe, like the linear encoder, is permanently attached to its own "smart" connector. This enables the digital probe to be simply plugged straight into the easy-to-use Solartron digital readout or into a PC or PLC via "Orbit", Solartron's networked measurement system.

The "smart" connector system means both linear encoders and digital probes can be mixed and matched in a wide range of measurement and gauging applications, such as the checking of camshafts.

For multi-probe applications, over 200 probes can be used in a single system which can be either daisy chained or banked together in blocks to form a multi-channel nest (Plate 1). The design enables individual probes to be easily identified and then removed or replaced without having to dismantle the Orbit system. 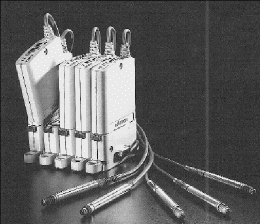 Plate 1 Each Solartron Metrology digital probe (as shown) or linear encoder is attached to a "smart" connector, which can be plugged into a "T Con" in blocks to form a multi-channel nest or daisy-chained together. They are easily removed

Available as spring or pneumatic push, the manufacturer says, the robust digital probe is ideal for applications requiring flexible fixturing for a range of different sized piece parts. Whereas an LVDT gauge probe provides its best performance close to its null point, requiring dedicated fixtures for each size of component, the digital probe can be used at any point over its entire stroke. This allows different size parts to be gauged in one fixture.

Solartron Metrology has also developed a "feather touch" version especially for delicate surfaces such as TV tubes and car windscreens. A normal probe exerts a tip force of approximately 70 grams, the feather touch is a mere 30 grams when used in the horizontal position.

The Solartron digital probe is a refinement of the LVDT. Instead of using a transformer current balance, the resident coils form part of frequency sensitive circuits. As the core moves, the inductance of the coils is changed, causing a change in frequency. By comparing frequencies the movement of the core can be calculated. The digital probe is calibrated using a laser interferometer in a controlled environment, giving linearity over the full stroke compared with LVDTs.