New optical technology is transforming electronics, medicine, communications, entertainment, and scientific research. Each month we see hundreds of developments that can have an important impact, from new laser material to optical fibres, from smart sensors to imaging systems. Despite the cutbacks in military spending, the multi-billion dollar optics and electro-optics industries should continue to grow respectably over the next five to ten years. There is a substantial amount of research and development pushing the frontiers of optics and electro-optics technologies and applications.

According to a released Business Communications Company, Inc. publication DOP96 Optical Materials and Engineering Industry Review, the market for advanced optical materials was valued at $543 million in 1995, and it is expected to rise to $682 million in 2000, creating an average annual growth rate (AAGR) of 5.9 per cent (Table I).

BCC estimates that the optical material with the largest share of sales will be the non-linear material segment. They were valued at $50 million in 1995 and will continue to rise to approximately $72 million in 2000, creating an AAGR of 9.4 per cent . 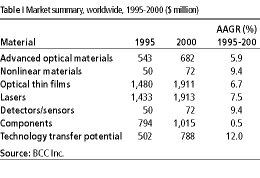 Overall, the multi-billion dollar optics and electro-optics industries are holding up reasonably well to the military cutbacks. Few companies would indicate that they have felt nothing, but most indicated that business is still reasonably good. Those in the very good category are involved in military areas, in which replacement components and systems and retrofits are involved, and commercial areas, which have strong international business ties. BCC projects optical thin films to reach an AAGR of 6.7 per cent. They were valued at $1.4 billion in 1995 and are expected to reach $1.9 billion in 2000.

Other optical components are expected to grow rapidly. In 1995 they were valued at $794 million and are anticipated to reach $1 billion in 2000. This will produce an AAGR of 6.5 per cent.

Finally, technology transfer potential sales were $502 million in 1995 and are expected to reach $788 million in the year 2000. This will create an AAGR of 12 per cent.