Currently valued at US$284 million, the European pressure measurement instrument market has been experiencing moderate growth in value over recent years.

European Pressure Measurement Instruments, a new report from MarketLine International, predicts that the market will continue to grow relatively slowly, at a rate of less than 4 per cent a year, though prospects for manufacturers' margins continue to look healthy with a steady increase in volume sales.

Key findings from the report are outlined below.

MarketLine forecasts that the European pressure measurement market will grow by 20.4 per cent by the year 2002 to reach a value of US$ 284 million.

Growth in the market will be largely brought about by price falls resulting from intense competition. These have not stopped the overall market value from rising, however, indicating a parallel rise in volumes. Existing customers have continued to renew their orders, but there has also been some widening of the customer base as new customers find the instruments more affordable.

While it may appear that a fall in prices is in conflict with profitability, margins for manufacturers are assured. Although the price for an individual unit may be lower, the rising number of customers increases unit sales. Since a manufacturer's costs are essentially fixed, they will not rise in tandem with the order volumes.

However, this effect will gradually diminish as it becomes harder to cut costs, and the supply of new customers ceases. The rate of growth is predicted to fall from 3.6 per cent in 1997 to just 2.9 per cent in 2002 (Figure 1). 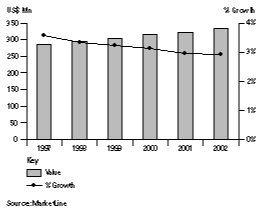 Fisher Rosemount is the market leader in all of the major European markets. The company is strongest in Benelux and weakest in France.

In the French, Italian and German markets it faces stiff competition from the newly combined forces of Hartmann & Braun Sensycon and Elsag Bailey. The newly merged company will have a strong position in France, Italy and Germany (Figure 2). 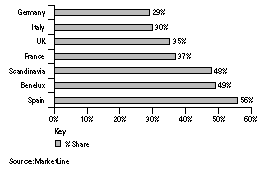 Although it is conceivable that the Elsag Bailey companies could overtake Fisher Rosemount in France, there is little prospect of their relative ranking in Europe as a whole changing in the immediate future.