Move towards increasing use of automation to dominate weighing machinery markets

Move towards increasing use of automation to dominate weighing machinery markets

A new report by international marketing consulting company Frost & Sullivan values the European market for industrial weighing machinery at US$972.3 million in 1996 and forecasts this revenue level to expand to reach US$1.27 billion by the end of the study period in the year 2003, growing at a compound annual growth rate of 3.9 per cent (see Table VI).

The maturity of the weighing machinery market has not prevented manufacturers from continuing to maintain large design and research departments. Although major new breakthroughs in the technology, such as the invention of the multi-head weighers, are relatively few and far between, there has been a steady improvement in the performance of the existing machinery. 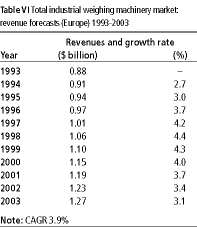 Industrial weighing machinery has seen a continual increase in the level of electronic control and instrumentation used. Electronic control allows for faster and more accurate operation of the machine, and for common control equipment to be extended to multiple pieces of equipment in the production process.

Demands have been made for equipment to be more reliable and rugged, allowing for harsh steam cleaning routines and the avoidance of long and costly periods of downtime.

The rising product quality demands, particularly from industries such as food processing, is leading to an increase in the levels of automation used in the process. Demand is rising for equipment to replace the less reliable and accurate human element of the production process, and for the upgrading of equipment that is already in the process.

"In order to comply with quality standards and procedures, such as BS 5750, higher levels of accountability and management information are required on the operation of the production process. The addition of various peripheral components to the equipment, such as printers, recorders and PC-based control systems, has seen a rise in overall market revenues."

The increasing complexity of equipment has led to rising demands from customers for supplier-provided service and support contracts. This has been compounded by the reduction in in-house engineering staff in many industries as part of their rationalisation plans.

Throughout Europe, customers are specifying greater cost efficiencies, and increased standards of performance. As a consequence, many manufacturers have moved towards modular designs to gain the maximum cost benefits of mass production while still offering customised equipment.

Some manufacturers have moved towards supplying complete weighing systems, providing the customer with a total weighing solution. In addition, producers have moved further into the provision of training, consultancy, and maintenance and service contracts.

Technology trends identified in Frost & Sullivan's study include the use of a greater range of specialist materials for hazardous and stressful applications, and the increasing use of computer modelling in the design stages to reduce the risks associated with building a full production plant.

In terms of end-user markets, the food and beverage industry dominates the overall industrial weighing machinery market, accounting for 31.7 per cent of revenues in 1996. This is followed by chemicals/petrochemicals and industrial products, valued at 21.4 per cent and 20.1 per cent respectively.

According to Frost & Sullivan's review of national markets, Germany holds the lion's share with an estimated 34.8 per cent of revenues in the overall 1996 industrial weighing machinery market. This is followed by France (14.1 per cent) and the UK (12.1 per cent).