Abstract The leadership of an organization has a profound effect on its ability to invent, sustain, and eventually profit from breakthrough innovations. In today's business environment, leaders are faced with a number of paradoxical options when making decisions about innovation. The author describes five such paradoxes and, from personal experience at Eastman Kodak, suggests a both/and approach rather than an either/or paradigm.

"Grow your company through innovation or perish" has become the mantra of large corporations. But many more companies fail than succeed at sustaining innovation. This is in spite of the enormous intellectual and physical resources that corporations can bring to the task of innovation. Most corporations were founded with an innovative, entrepreneurial spirit that somehow manages to evaporate as they become big and successful.

...Most corporations were founded with an innovative, entrepreneurial spirit that somehow manages to evaporate as they become big and successful...

I have the good fortune to lead a group at Eastman Kodak Company called the System Concepts Center (SCC). The SCC is a multi-disciplinary team dedicated to driving significant business growth through innovation of "breakthrough" products and services. We have learned and adapted many leading-edge practices like customer ethnography, trend analysis, ideation, rapid prototyping, and market testing. There are numerous excellent sources of information on these practices, so I will not address them here. Instead, I would like to share some leadership principles that I believe can have as much or more impact on the ability of an organization to innovate.

The dictionary defines paradox as "a seemingly contradictory statement that nonetheless may be true." In the last six years, I have found many paradoxes that surround innovation. They often looked like "damned if you do and damned if you don't" alternatives.

The insight that forms the innovation leadership principles is the need to embrace a paradox rather than trying to resolve it. The key to embracing paradoxes is to think of them not as "or" alternatives, but rather as "and" alternatives. In the following examples, we will explore two categories of paradox: paradoxes that are related to the nature of large corporate structures; and the human paradoxes, which are more general and apply more broadly.

Organizational systems and culture evolve over time. The longer an organization is in place, the more deeply rooted the culture becomes. In successful companies, the culture can become very conservative with respect to innovation. Innovation in these companies usually appears as evolutionary improvements on existing product lines. As organizations become large and successful, protecting the present often wins out over creating the future.

The following paradoxes relate to the integration of innovation into the business system. These topics have been debated in the literature with passionate and convincing arguments for each point of view.

1. Is innovation "somebody's job" or "everybody's job"? The premise for forming the SCC was that breakthrough innovation needed to be someone's job in order to get it done. Breakthrough innovation is a difficult job. It cannot be achieved effectively in an employee's spare time. When it competes with near-term, urgent issues for attention, innovation loses. A dedicated group like ours has been able to focus on the task and build the competencies necessary to sustain the capability over the long term. On the other hand, relying on a very small piece of the company to accomplish innovation does not harness the power of the whole organization and can easily become isolated and contentious.

We believe that innovation is somebody's job and everybody's job. We do that by pulling people from throughout the corporation into our new concept projects. We also have responsibility for the Worldwide Innovation Network, which is a vehicle for employees throughout the world to submit ideas for new products. We call it the Employee Idea Channel, and we process hundreds of ideas every year.

On the other hand, the separate "skunk works" approach has significant drawbacks. The most significant is the strong tendency for the corporation to reject the new product or business when it emerges from the dark. Existing businesses will reject new ideas that they did not have a part in defining. The alternative of starting a brand-new business unit also faces significant hurdles when it cannot take advantage of existing channels and infrastructure.

...The key to embracing paradoxes is to think of them not as 'or' alternatives, but rather as 'and' alternatives...

We have dealt with this paradox by trying to find a way to simultaneously be close to the business while being separate enough to drive significant innovation. We have found that one way to manage this dilemma is to develop unique relationships with the existing businesses. In particular, we have found that when the business units set up separate groups focussed on new business growth, we can drive significant new ideas within that business structure. The analogy I have used for this relationship is the way moons circle a planet (see Exhibit 1). 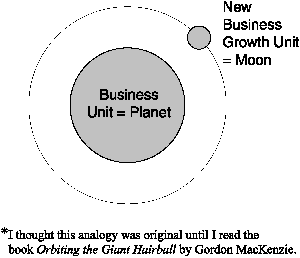 The moons represent the units focussed on new business growth within the business units. These moons have two important characteristics: they are small in size relative to the planets, and they have just the right gravitational pull to stay in orbit. Managing that gravitational balance is the leadership challenge. With too much gravity, the moon implodes, i.e. innovation becomes incremental. Too little gravity lets the moon fly out into space, i.e. innovation becomes isolated and disconnected.

Certainly, the adoption of this model alone does not drive business growth. There will be significant new business opportunities that are well beyond the scope of any current business unit. The corporation needs to have an outlet for these kinds of opportunities. A corporate, new-business development function that operates outside the existing business structure is also essential to create substantial business growth.

History offers many cases of significant innovation in which the human dynamic has overcome some of the most difficult organizational impediments. Therefore, it is critically important for the innovation leader to create an environment where the human spirit can thrive. This is particularly challenging in a large, well-established corporation. The true entrepreneurs are generally not attracted to a large company, and even if they manage to find their way in, the culture generally discourages risk-taking. Finding the right people to do this work within the boundaries imposed by a large corporation is a significant challenge. The right people are those who can live with the ambiguity of the following paradoxes.

...Sustained innovation can happen in large corporations, but only if leaders at all levels of the corporation believe it can happen, are patient, and embrace the paradoxes...

There are several ways we try to create an environment in the SCC that has both passion and innovation. First, our teams are a mixture of very creative people with very practical people. This produces some very interesting team dynamics. Also, we generally do not start a project unless the team has passion for the concept. We ask the teams to embrace the inherent uncertainty in their projects rather than wish it away. Finally, and most important, we have tried to tie the passion to the overall success of the SCC and the company rather than to any one idea. This is a key element of our vision statement: "We will discover the new imaging frontiers and convert ideas and technologies to truly meaningful products or services for our customers and sustainable business opportunities for our company." Focussing on this higher goal makes it much easier to stop a project when it no longer shows as much potential as other projects.

I do not mean to suggest that it is easy to embrace the paradoxes outlined in this article. In fact, it is a constant struggle. There are some common mistakes that are made when trying to strike the delicate balance when moving from "or" to "and." The two sides of each paradox have both compelling merits and significant faults. The most common mistake is to oscillate between the two poles, chasing the illusive merits of each extreme. The second mistake is to strike a balance that leads to mediocrity. Take care not to give up all the merits of the two extremes by trying to avoid their faults.

Sustained innovation can happen in large corporations, but only if leaders at all levels of the corporation believe it can happen, are patient, and embrace the paradoxes.