A warm welcome to the first issue of QRFM in 2013. In the months leading up to the launch of the journal in 2009, Volume 5 seemed a long way off but, thanks to the support of authors, reviewers, editorial board members, readers and the team at Emerald, we have reached this point in time with the journal in a very healthy state in terms of both the number and quality of submissions. While mentioning Emerald, I would like to take this opportunity to thank Megan Beech who has been involved closely with the journal over the last year or so and has made a real contribution to its success. While wishing Megan all the best for the future, I am delighted to welcome Samantha Thompson as the new Managing Editor and Valerie Robillard as the new publisher for QRFM and look forward to working with them on the journal’s continuing development. I would also like to express my thanks to Omar Masood, whose success in putting together a special issue on Islamic Banking and Finance in 2011 was such that this ultimately led to three dedicated issues on the topic; I am sure the last two of these (Issues 2 and 3 of 2012) will prove as hugely popular in terms of downloads as did the first (Issue 2 in 2011).

Since my last editorial, I have had the pleasure of attending the conference on “Behavioural Finance and Cross Border Investments & Acquisitions”, hosted in June 2012 by the Behavioural Finance Working Group (BFWG)/M&A Research Centre (MARC) at Cass Business School in London. Many of those involved have been valued supporters of and advocates for QRFM since the pre-launch period and so I was delighted to be able to the present the QRFM award for Best Qualitative Paper at the conference to Vikash Ramiah, Yilang Zhao, Michael Graham and Imad Moosa for their article entitled “Behavioural aspects of working capital managers” (Plate 1). More generally, the conference showed once again that qualitative work in the broad finance area is developing apace and pushing the boundaries of knowledge. It was evident from the conference that one of the most existing themes that is likely to emerge in the area over coming years relates to what might broadly be termed “biological” in nature; in particular, the Cass event saw papers presented that utilised DNA swabs, analysis of brain wave patterns and theoretical application of natural selection to financial market research. Clearly there are many ways in which this broad methodology could develop – and not all of these will necessary lead to subject-defining pieces of work – but this type of epistemalogical movement shows that the scope for qualitative, interaction-based analyses to position themselves at the forefront of modern finance research is potentially unlimited. 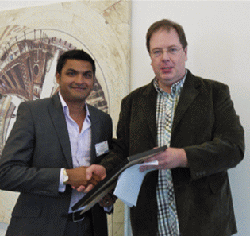 Turning to the present issue, the first of the five studies, “Complementing a positivist approach to investment analysis with critical realism: challenges and a way forward” by Loretta O’Donnell, Robin Kramar and Maria Cadiz Dyball, applies the critical realist paradigm to the study of equity research reports. The paper supports movement away from a positivist focus to a “deeper dialogue” between stock markets and company boards in the context of post-positivist, critical realism and the collision of institutional logics. In “Risk management in the Ghanaian insurance industry,” Joseph Akotey and Joshua Abor examine risk management amongst Ghanaian insurers. The evidence points to “good practice” amongst life insurers in the form of risk policy documentation and risk appetite levels that is not evident in the non-life sector. However, there was evidence amongst both groups that certain firms have failed to establish independent risk assessment units and instead rely on internal audit units for critical tasks. More generally, the study highlights the reactionary nature of much of the change in risk management amongst Ghanain insurance companies and the authors call for a more proactive stance to be taken if the industry is to grow in a sustainable fashion. The third paper in this issue, “An investigation of the role of technical analysis in Kuwait”, by Hesham Almujamed, Suzanne Fifield and David Power, reports that technical analysis is often used in Kuwait, particularly in the context of entry/exit timing and is more often moving average- than filter rule-based. While the interviewees – like their developed country counterparts – tend to employ fundamental analysis as their primary equity valuation technique, the interviewees’ place more faith in technical analysis than is typically found to be the case amongst investors in the world’s richest countries. “Post-crisis bank liquidity risk management disclosure”, by Asongu Simplice, investigates the extent of compliance with the Basel II Pillar 3 disclosures on liquidity risk management. The results reveal that only a quarter of the sample make the information accessible to the public and this is argued as being particularly worrying given the drastic impact of the credit crisis and the need to see the banking system develop the transparency needed to deal more robustly with similar such problems in the future. The final study in this issue, “Targeting IPOs from the CEESM of Poland during the global financial crisis,” by Lukasz Prorokoski, provides interview-based evidence regarding the Warsaw Stock Market’s success in attracting equity launches at the time of and in the years following the international credit crisis. The evidence points to a number of identifiable factors that have led to the exchange’s growth in the market, but suggests that a range of challenges remain if the achievements of recent years are to form a platform for the longer-term.