Nova Paint Club, founded in 1983 to develop co-operation between independent paint manufacturers worldwide, has reached a new record membership of 17 companies from 17 countries with the election of Vogel Paint Inc., USA (Plate 11).

Vogel, family-owned and established for more than 70 years, has a dominating position in the US Midwest paint industry with five manufacturing plants and 12 distribution centres. It employs 800 people and sales well exceed $100 million. 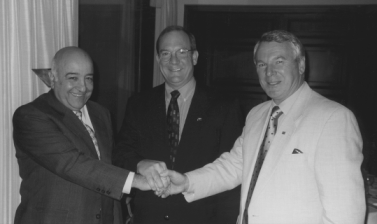 The election of Vogel to the Nova Paint Club took place at the club's recent meeting in Athens, attended by Vogel Inc. president Drew Vogel, who said: "We are well aware of the valuable services which Nova has been able to provide for its member companies and we believe we can make a meaningful contribution to the Club's future development."

Nova secretary-general Peter Lovell added: "It was important to recruit a member from the world's biggest national paints market and Vogel is an ideal representative for the USA, being particularly strong technologically in architectural and industrial coatings."

At the board meeting Dr S.G. Tong, general manager of Par Paints, Malaysia, was elected to the executive committee, replacing Sr Alfredo Achar, president of COMEX (Mexico), who retired. The next board meeting will be in the UK.