We are informed that by using carbon, medium wave infra-red emitters, from Heraeus Noblelight, of Bromborough, Land Rover has been able to achieve the required cure of a pvc sealant and anti-chip coating applied to Freelander vehicles at its Solihull plant, within the time constraints dictated by the assembly line speed (Plate 1). The new system reportedly has also proved more energy-efficient than competitive techniques and provides a better working environment. 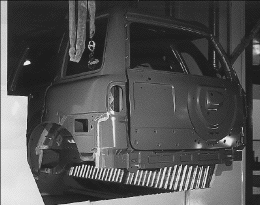 The infra-red system is installed in Land Rover's state-of-the-art Paintshop 21, which reflects the latest drying and curing technology and handles all Land Rover vehicles, from the new Freelander to the well-established Defender. Unlike the other models in Land Rover's range, the Freelander's anti-chip protection in the sill area is in the form of a sprayed-on pvc sealant compound. When the line tracking system identifies an approaching Freelander, the spray system which applies the pvc compound is activated and, at the same time, the tracking system connects with a plc for the infra-red curing equipment, to ensure that the required pre-curing will take place. This pre-curing is essential, as any softness in the anti-chip coating could lead to it being damaged during further production operations carried out before the vehicle is painted with primer.

The available time in the curing section is dictated by the line speed and is around 60 seconds. For this reason, it was originally thought that the pre-curing would be best achieved by short wave infra-red, which can be switched on and off virtually instantaneously. However, trials using short wave infra-red had proved inconclusive and the required cure had not been achieved within 60 seconds.

Consequently, at the request of Haden Drysis International, the project managers for Paintshop 21, trials were carried out at Heraeus's test and evaluation facilities at Bromborough, using carbon fibre element medium wave infra-red emitters. These combine the fast response of short wave with the energy-efficiency and curing effectiveness of medium wave. The trials established that a good cure could be achieved in under 40 seconds, with the emitters at the distance from the sills necessitated by the production line space restrictions.

As a result, Heraeus pre-curing systems were installed on each of the two paint shop lines. Each system consists of four cassettes, each containing sixteen 1kW carbon emitters. There are two cassettes on each side of the line, fitted at 20° to the vertical to allow full infra-red radiation of the sill area. To ensure maximum energy efficiency, they are programmed to cascade into operation in banks of eight emitters Four on each side of the line.

According to Haraeus, since installation, the system has continued to perform efficiently and reliably. The pvc antichip coating is cured sufficiently to prevent any damage before the primer is applied and the use of carbon medium wave infra-red emitters has allowed an energy saving of around 35 per cent compared with the short wave alternative. In addition, operatives on the line are not subjected to intermittent high intensity glare, which would have been the case if the short wave equipment had been fitted.

This is the second Heraeus system in Land Rover's Paintshop 21, complementing the sophisticated infra-red tunnel ovens, which are used in the drying of the water-based colour coats, applied to all vehicles.

Another recent installation by Heraeus is on a production line for the Vauxhall Vectra fuel tank which has maximised both throughput capability and energy efficiency by using a drying tunnel equipped with infra-red emitters from Heraeus Noblelight, of Bromborough. The infra-red system was selected at the Luton plant to give fast, efficient surface drying of a water-based spray coating, which is applied at an intermediate stage of fuel tank assembly (Plate 2). 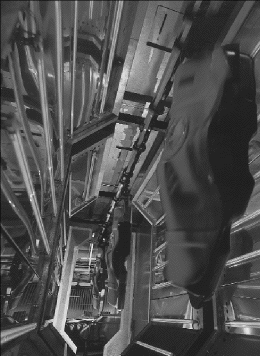 The coating provides corrosion protection for the steel tank and is manually spray applied. Before the tank can then be placed in a fixture for attaching fuel pipes, clips and electrical components, the coating must be sufficiently dry to allow handling.

Although the coating is capable of being stoved completely in a drying oven or tunnel, Vauxhall production engineers chose a drying method which requires less energy: following its initial exposure to infra-red heating the coating is touch-dry and can be placed in its fixture without affecting the quality of finish. No further heat input is required to harden the coating, which then dries at room temperature.

A total of 28 Heraeus Noblelight 3.25kW medium-wave IR emitters are installed in the drying tunnel. These are mounted in four reflector panels which direct the infra-red heat radiation evenly around the fuel tanks. Should the conveyor be stopped for any reason, the emitters are automatically switched off, preventing any heat damage to the product.

This is vital as, at the coating stage, the tank is already fitted with a fuel pump, with thermoplastic fittings exposed to the heat source.

Vauxhall considered the alternatives of gas-fired hot air and gas-fired infra-red heating, before deciding on electric infra-red. The electric infra-red system requires less floor space than a convection oven, and its fast response and clean operation were preferred. In addition, as the fuel tank coating is black, this enhances its absorbency to radiant heat energy and therefore increases the efficiency of the drying process even further.

Throughput from the drying tunnel is currently 74 units per hour and the infra-red system offers the flexibility to cope with increased production, if needed.

Prior to being coated, each fuel tank and pump is leak tested by injecting air whilst the tank is immersed in water. Afterwards, the bulk of the water is blown from the tank surface by an air-line and then removed completely by a pair of air knives. The tank is then raised to a temperature of 25°C by hot air before it arrives at the spray coating station.