Rent review submissions - back to basics

The task of the professional, it has been said, is to make complex things simple, not the other way round. So a "back to basics" is always welcome, provided it clarifies and not confuses. Fortunately both speakers, Eric Shapiro and Philip Freedman, are experienced practitioners, an emphasis being given to the practical rather than theoretical.

The basics were broken into eight areas:

Why, how and who?

The rent review industry has clearly emerged again following the recession of the early 1990s. The new mindset of the tenant to resist reviews and the desperation of landlords to see income growth is giving rise to more and more referrals to independent determination. But a decision to go to independent determination was seen as an admission of failure. Regrettably this can sometimes be laid at the surveyors' door if unrealistic expectations are held by both sides, based on a lack of forceful advice to the client and/or a lack of proper research as to the true value. A "dialogue of deaf people" will seldom achieve resolution. Sometimes a "no loss" scenario for the landlord exists, such as where some evidence of rental increase exists, the clause is upward only and the tenant has made no offer whatsoever. The downside costs of third party determination will be no impediment, given that for every £1,000 increase in rental, £10-15,000 will be added to capital value.

Careful thought is required as to where an independent surveyor can act as an arbitrator or expert. The use of experts is more appropriate for lower value property. Indeed the RICS has a special procedure for such property, where experts undertake the determination at a fixed fee of £750. Unusual properties are best referred to an expert who is able to use his own knowledge - in contrast to an arbitrator who is required to weigh up the submitted evidence. On the other hand, arbitrators can be directed and their appointment may therefore be more suitable in the case of high value properties.

The choice between in-house and consultant surveyor was considered to be important given that the primary duty of the surveyor is to the judicial body to whom evidence is given. All comparables, whether helpful or not, should be disclosed. In other words, the evidence must not be biased towards the party who is paying the surveyor. It was questioned therefore whether the in-house surveyor can remain totally impartial.

The identity of the independent expert or arbitrator can be a lottery if appointed by the President of the RICS. It would be better if both sides can agree on a surveyor known to them. Both sides could reach agreement by exchanging nominations on the same day to see if a name appears on both lists.

It was noted that the two types of review mechanism comprised those which required a trigger notice and those where the review arose automatically. Despite the general presumption that time is not of the essence, automatic reviews have become more common as there are still a number of circumstances where time will be of the essence. Most of these circumstances are well known but the actual wording in a review clause is all-important. Attention was drawn to Mammoth Greeting Cars Ltd v. Agra Ltd (1990) NPC 8 where the tenant's failure to serve a counter notice by a specified date was held to be of the essence.

A plethora of recent cases were quoted on trigger notices, avoidance of time of the essence, delays and tenant's counter notices.

Review dates - clearly specifying the dates of review is of undisputed importance. Watch out also for the extra review inserted just before the end of the term. Where the tenant holds over and an interim rent is sought, the landlord will avoid the cushioning effect which s24A provides.

An interesting part of the presentation was devoted to the rent review formula. Attention was drawn to the need to understand the reasoning behind the type of formula used. Table I summarises some of the main formulae, which were discussed and which are likely to be encountered in practice. 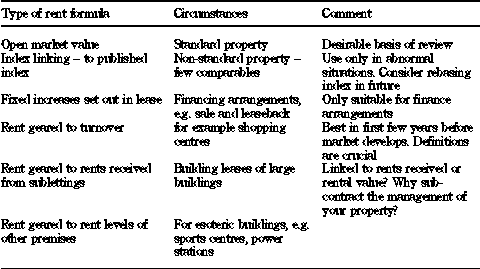 Table I. Main formulae under discussion

As one would expect, a significant proportion of time was devoted to an analysis of the open market rental value formula. The hypotheses, disregards and assumptions were examined in some detail in the light of recent case law. Distinctions between reasonable and "best" rent were examined, particularly whether best adds a special meaning. Given that any normal landlord will accept the highest (and therefore best) offer, the word best is surely redundant. On the other hand, best could include special or rogue bids. It depends on whether the review clause refers to the best rent that can reasonably be obtained.

Further discussion included analysis of "same" lease terms, hypothetical term, willing lessor and lessee, meaning of "let as a whole", vacant possession, fitness for use and occupation, headline rents, disregards and other assumptions. It always pays to look very closely at the wording. In the case of improvements, for example, the wording of the disregard may be too narrow to cover improvements made by the tenant before the lease was granted. Thus, improvements undertaken under an agreement for lease may be included.

The second part of the conference considered preparation of the written submission and counter submission, the various legal aspects of negotiation and rules governing arbitration and expert determination. All of the basics, and more, of rent review submissions were covered and presented with a degree of humour appreciated by delegates.