During the second quarter of 1999, Bank of England statistics show that total property lending fell by some £134 million to £41.2 billion, a decrease of 0.3 percent. This small fall follows on from the record increase last quarter of £2.0 billion which, ignoring the exceptional figures for the third quarter 1997 which included the five newly created banks, represented the largest increase since the final quarter of 1990. Despite the slight decrease in the second quarter, the total lending figures are still greater than the previous high of £40.7 billion recorded at the end of June 1991.

Despite a healthy and steady level of activity in the commercial property market, the rise in medium-term interest rates during the second quarter is likely to have had a significant impact on the level of finance driven transactions. In February this year, the five year swap rate reached a historic low of around 5.1 per cent triggering an influx of high leveraged private investors and helping to contribute to the record rise in the lending figures last quarter. By the end of the second quarter, medium term interest rates, on the back of UK and US inflation concerns, had increased to around 6.5 per cent (Figure 2).

The second quarter (April) also saw British Land offering a £1.54 billion bond issue based on the rental income of 12 properties at the Broadgate Centre in the City of London. The proceeds of this bond are reported to be used to refinance the company's bank debt of some £1.2 billion and therefore this alone represents a sizeable reduction in bank property lending.

The banking market itself remains highly competitive and we continue to be in contact with banks who are keen to expand their UK property loan books. The property investment market has also continued to demonstrate strong activity. During the last quarter investment activity by UK institutions actually increased and this quarter two lot sizes of over £100 million are reported as having gone under offer in central London. We believe this demonstrates continuing favourable sentiments from both investors and banks and, despite the recent upward trend in medium-term interest rates, we do not expect to see a sharp fall in the Bank of England property lending figures for the third quarter of 1999. 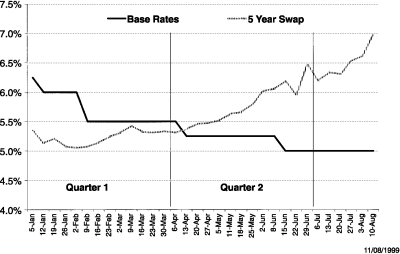