London's West End is the second most expensive office market in the world, with Class A total occupancy costs of £77 per sq ft - according to the latest bi-annual Global Market Rents research by international property consultants CB Hillier Parker.

The survey monitors and ranks office occupation costs in 143 cities around the world - the most markets tracked by any world rent survey (Table IV shows the top 15 of these). 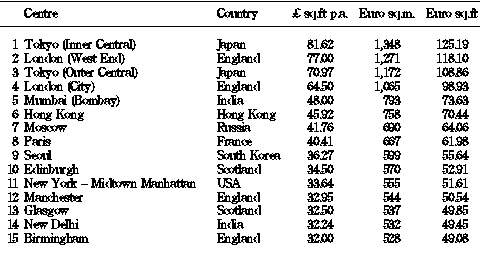 Since office space is defined in different ways, and in multiple currencies around the globe, CB Hillier Parker's Global Market Rents calculates the £ sterling cost of renting an actual square foot of office space, including all costs of occupancy.

The survey performs a two-fold purpose: as an indicator of rental growth for property investors as well as relative occupation costs for corporations planning multinational expansion.

Following the fall in confidence due to the global economic crisis at the end of last year, occupier confidence has recovered more quickly than anticipated in the London office market. The amount of speculative construction activity has risen over the last six months, and is likely to continue to increase over the remainder of the year, but the level of occupier requirements for office space has also risen. Supply of good quality space remains limited and, in contrast to the outlook six months ago, further rental growth is anticipated over the rest of 1999.

With a comparatively healthy outlook for both the economic and property market fundamentals, investment sentiment is strong with yields reducing over the last three months following an upward blip earlier in the year. A major influence at present is the acute shortage of stock, with very few top quality investments being offered on the open market.

There is currently no Grade A accommodation available in Edinburgh city centre and only one completion scheduled for this year. The number of schemes initiated in the last twelve months should have heralded a reduction in the margin between demand and supply. Further pre-lets have however already eaten into the supply pipe-line edging head-line rents upwards. We anticipate a further 12-18 months of under supply with 10-15 per cent of rental growth.

Glasgow's city centre office market continues to improve. The recent major letting to J.P.'Morgan justifies the strength of the city as a centre for inward investment. Other major lettings are in the pipeline which will serve to consolidate rental growth. The development sector is now very active. With only two schemes planned for completion in 2000, there is likely to be a shortage during next year. Positive news if you are a landlord!!!

Birmingham continues to expand commercially. As the UK's second city with excellent communication links to the rest of the UK and Europe, but with City centre development restricted by issues like car parking and listed facades, we are experiencing a major shortage of supply in the office market. Current rents represent realistic value within the UK.

Western Europe on an upswing. According to Bill Ashton, CB Hillier Parker Director for Europe, Middle East and Africa, rental levels throughout the region increased by 8.1 per cent over the last 12 months but there were wide variations between cities. Western European markets such as Dublin and Milan led the advances with 50 per cent and 31 per cent increases respectively in prime local rents over the last 12 months. Amsterdam, Barcelona, Belfast and Birmingham (14.81 per cent), Copenhagen, Frankfurt, Glasgow (12.51 per cent), Madrid, Munich and Rome also witnessed double-digit growth in occupation costs. "In Eastern Europe, markets such as Moscow and Warsaw experienced softness while most African markets' rental levels were stable or moved upwards. Properties in these markets continue to attract new tenants and occupancy costs in Western Europe are on an upward trend despite slowing growth projections for several key economies this year", Ashton added.

Signs of life in Asian office markets. In Asia, signs of renewed life emerged in several countries formerly ravaged by currency crises, mounting debt and contracting GDPs. Yet, despite growth projections ranging from 1.2 per cent to 5 per cent for some of the regions economies, office demand remained weak in the first six months of the year. "Although the overall trend in rentals in Asia continues to be a downward one", says Tim Kirkus, CB Richard Ellis Director for the Asia Pacific Region, "revaluation of some Asian currencies has made office markets more expensive to overseas tenants".

Occupancy costs decline in slow growth Latin American markets. Despite a pick up in exports for major energy-producing nations in Latin America, economic growth forecasts remain low for most of the region. According to Liza Him, CB Richard Ellis Director for Latin America, the devaluation of the Brazilian Real had a major impact on some lease negotiations in the Southern Cone, specifically in the cities of Buenos Aires, Sao Paulo and Rio de Janeiro. The effects of the overall international financial crisis have caused many office markets in Latin America to experience downward pressure on total annual occupancy costs. Overall conditions in the Sao Paulo, Brazil, market actually appear to have improved in the first six months of the year. However, currency issues resulted in Sao Paulo recording the most precipitous drop of any market in the Global 50 Index over the last 12 months, with occupancy costs falling 38.2 per cent.