Risk reporting by the media

Risk reporting by the media

The researchers monitored a selection of national and regional newspapers in the UK and Sweden every day during the two-month period centred on 28 April 1996, the tenth anniversary of the Chernobyl disaster. They also conducted detailed surveys of people's perception of a variety of risks during this period. The time period was chosen to cover the expected increase in reporting of nuclear hazards, but it was overshadowed by an unexpected turn of events. On 20 March 1996, the week before the survey began, Stephen Dorrell (then UK Minister of Health) announced a potential link between BSE and new-variant (nv) CJD. This was followed by massive media coverage, and provided the researchers with an unexpected bonus (or headache, depending upon the domain of interest of the particular researchers involved).

In the UK, The Guardian, The Observer, The Times, The Sunday Times, The Sun, the News of the World, The Mirror and the Sunday Mirror were chosen as representative of national readership. Two weekly regional papers were also chosen: the Whitehaven News, local to the Sellafield nuclear reprocessing plant; and the Reading Evening Post, the UK researchers' regional paper at the time. A selection of six Swedish newspapers was sampled, again chosen to broadly represent the population's readership profile. The Swedish press does not have the same distinction between national and regional reporting as the UK, with the large papers having a national distribution, but a focus on a regional city.

In addition to reports about Chernobyl and a variety of other nuclear power issues, the researchers recorded reports about a variety of the main contemporary hazards, including BSE, road accidents, alcohol, air pollution, and chemical waste. Some of the results of the survey are given in Table I. In the eight-week period, there were five times as many reports on the selected hazards in Swedish newspapers as there were in the UK papers. In order to take into account the different number of editions sampled in the two countries, the data were converted into "hit rates". These show the relative frequency of reports on the different hazards in a single edition of an average paper. The hit rate shows that Swedish newspapers print three times as many reports on the major hazards as UK papers. Figure 1 illustrates the differences between newspapers in the two countries. Despite the fact that the announcement of a possible link between BSE and nvCJD was made in the UK, there was an average of just over one report per edition (eight per week) in Swedish papers, compared with about two-thirds of a report (five per week) in the average UK newspaper. The extent of hazard reporting did not vary significantly between different types of UK newspaper (political persuasion, tabloid versus quality broadsheet, national versus local). It seems that there is a difference in the interests of the two cultures, with the Swedes more receptive to safety information (they are, after all, the inventors of the world's safest car) than the British. This may be an important consideration when trying to communicate public health messages across different cultures. It is possible that it may apply across different sectors of the UK population, although this study was not designed to investigate this. 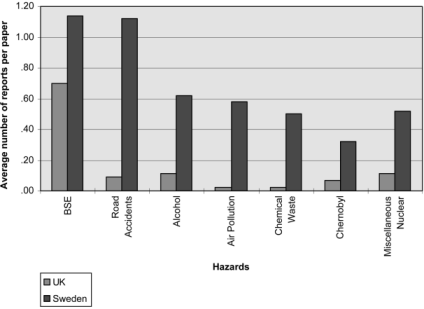 When the types of risk reported in the two countries were analysed, it became clear that by far the predominant issue at the time in the UK was BSE, accounting for 63 per cent of all reports. In Sweden a quarter of all reports were on BSE, the same proportion as for road accidents. Interestingly, the proportion of reports on Chernobyl and nuclear hazards was very similar in both the UK (16 per cent) and Sweden (17 per cent), despite the greater initial impact of the disaster in Sweden. It may be that reporting on BSE achieved a "saturation" level in the media, with the newspapers using up potential resources (in terms of reporters and column inches, etc.) that might otherwise have been available to report on Chernobyl – even in Sweden, where the hazard was of greater significance.

The reporting of different hazards across the sampling period also provided some interesting information. Unsurprisingly, considering the significant announcement during the previous week, BSE was the most reported hazard in the first week of the study. It was the subject of around five times as many reports as most of the other hazards surveyed. From then on the number of reports on the subject fell steeply, but it remained by far the most reported single risk in the UK throughout the sampling period. In both countries there was an increase in the reporting of the Chernobyl disaster in weeks three, four and five, coinciding with the anniversary, but reporting then tailed off very quickly. The researchers found some evidence of heightened reporting of related risks in Sweden, with increased reporting of nuclear issues in general, coinciding with decreased reporting of Chernobyl after the anniversary. This could reflect a "generalization" of concern, with the media experiencing greater sensitivity to nuclear issues, primed by Chernobyl, and thence seeking out related stories. This effect did not occur in the UK, and as such, is one of the only pieces of evidence that the Chernobyl issue was of particular concern to the Swedish media.

The frequency with which an issue is reported will be an important factor in bringing it to the attention of the population. However, the actual content of the reports is arguably more likely to influence the attitudes and choices of the readership. The researchers characterised the reports according to the tone of reporting. They considered the headline separately from the body of the article, as readers may use these as a tool for deciding whether to read the full article. Headlines about hazards were unlikely to be reassuring in either country, but the frequency of alarming headlines showed great differences between the two countries. A third of headlines about hazards in the UK used alarmist vocabulary, compared to only one in five in Sweden. UK headlines also showed a greater tendency to report conflict (24 per cent of those surveyed) than those in Sweden (5 per cent). The contents of reports about hazards concentrated on associated illness, injuries and deaths in both countries, and may be seen as a general characteristic of all hazard reporting. Other differences in the tone of reporting seemed to be hazard specific. For example, economic effects were a strong consideration for BSE reports in the UK and Sweden (19 per cent and 26 per cent respectively).

The impact of BSE on animals was focused on in almost all of the Swedish reports, compared to just under half in the UK, where reports covered a wider range of effects. Environmental concerns featured strongly in Swedish reporting, but the researchers only recorded four UK articles focusing on environmental issues in the entire eight-week period. This would seem related to the higher frequency of reporting about environmental hazards in Sweden. The range and depth of issues considered in the papers seemed to depend upon the relative importance of the hazard to the target readership. As such, richer conceptualisation of the hazards – taking a wider range of perspectives and angles – took place in Swedish reports about Chernobyl and nuclear risks than UK reports, while the reverse was true of BSE. However, reports on hazards in both countries failed to make significant use of relevant statistics regarding numbers of people affected or risk factors. This may be important information for opinion forming.

The study has given a useful insight into how risks are reported. The comparison of BSE reporting in the UK with Swedish reporting of the Chernobyl anniversary highlights differences and similarities between domestic and foreign risks. The nature of media reporting will be compared with surveys of public perceptions of these risks conducted before, during and after the media survey. This should allow us to see whether the extent and content of risk reporting coincides with changes in the public perception of these risks. This analysis is now underway. Once completed, it may assist campaign managers in the planning of more effective public health education programmes.