Established ideas are being challenged and new boundaries created by Photo Electro Forming (PEF) technology (also known as UV-LIGA) which is increasingly attracting lateral thinking designers and OEMs due to its proven ability to produce ultra-fine metal parts in volume for a host of present-day and next-generation MEMS and micro-applications.

Microstructure specialists at Tecan’s Class 1000 micro-manufacturing facility have developed processes that deliver cost-effective micro metal parts, and larger parts with ultra-fine features, suitable for a vast range of applications – where products will be repeatedly made significantly smaller and finer, at lower cost and with fewer production processes. In addition to nickel, the parts can be formed in other metals such as copper or gold, alternatively, epoxy can be used as a structural material.

Major benefits of PEF – over alternative options such as micro-milling, micro-edm or micro-laser techniques – are essentially two fold, says the company.

Firstly, if you are creating a micro part using PEF, a molecule-by-molecule growing process, you create parts which are exceptionally accurate and free from stresses and burrs. These significant advantages are not available from micro-milling or micro-laser techniques which can leave burrs and stresses – these can be removed using secondary processes, but of course this involves further investments in time and money. It is possible to produce virtually burr and stress-free micro parts if the micro-laser/milling process is slowed to a minimum – but again this has disadvantages in time and labour costs.

Secondly, and equally importantly, once a PEF product design is cleared for production, highly cost-effective mass production can be achieved. For example, millions of identical parts, or a mixture of different parts, can all be produced, simultaneously on a single mandrel in a single production process. So versatile is the process that as well as large quantities of micro parts being produced (Figure 7) – single large parts with large quantities of micro characteristics, such as test sieves for particle characterisation, can also be produced – all with burr and stress-free apertures and edges and with huge savings in time and costs compared to alternative “one-by-one” options. 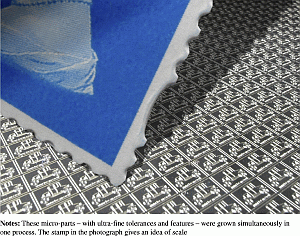 Typical features can be as fine as one or two microns, and in some cases sub-micron tolerances can be achieved. Both single-thickness and 3D parts can be produced.

“As designers’ relationships with us develop, they increasingly realise that we can make micro-components to more exacting designs and with tighter tolerances than they ever realised were achievable,” said David Worsdell, Marketing Manager, Tecan. “As they begin to understand the process, they also see the advantages of PEF for mass-production.”