Carol Marsh, a student from the highly acclaimed Institute for Systems Level Integration (iSLI) based in Livingston, has won the Elektra Award for Student Engineer of the Year (Figure 1), beating-off competition from both undergraduate and postgraduate students attending academic institutions all over Europe. Now in its fifth year, the Elektra Awards are the most prestigious product technology and business awards in Europe. They recognise the achievements of individuals and firms across the electronics industry. 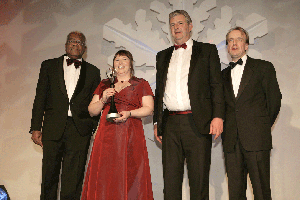 Carol is studying for an Engineering Doctorate (EngD) in System Level Integration at iSLI and is currently in her third year of research. The EngD programme is the flagship doctoral qualification of the government-funded Engineering and Physical Sciences Research Council. It is a four-year programme, placing emphasis on research within an industrial context. Students, known as Research Engineers, combine a research project, based with a UK sponsoring company, with accredited technical and business training. The EngD is the ideal opportunity for both employers and students to engage in a mutually beneficial relationship.

Carol is sponsored by Algotronix Ltd, a UK-based supplier of technical due diligence on semiconductor companies and a vendor of silicon IP. With the aid of iSLI and Dr Tom Kean, Managing Director of Algotronix, Carol has produced research primarily relating to the electronic tagging of integrated circuits, IP cores and FPGA designs. Her designs focus on the detection of fraudulent activity and provide reliable product and version identification. She has been developing Algotronix' DesignTagTM product, a very small, low-power IP core which functions as an “active” tag for a larger design. The DesignTagTM communicates through the chip package with an external “reader” using small changes in chip temperature as a signaling mechanism.

Carol has produced circuit designs for several variants of the DesignTagTM which were demonstrated very successfully at the 2007 Design Automation Conference in San Diego and at the Cryptographic Hardware and Embedded Systems Conference in Vienna. The circuits will be used in Algotronix' commercial products. In addition, Carol has extensively researched cryptography and used this knowledge to enhance Algotronix' Security IP Cores.

Tony Harker revealed that “the importance of Carol's research cannot be underestimated”. Currently, accepted methods of inking IC packages can be easily abused. More deeply embedded identification such as chip metallisation requires destructive testing to confirm identity. Furthermore, FPGA designers or IP core vendors cannot mark the package of the chip nor can they easily customize the metal layers of their product. The circuits she has designed are particularly challenging because they must perform what is essentially an analogue communications function using only digital logic. A security tag is only useful if its resource requirements are minimal compared with the design it protects placing difficult research and design constraints on the tag circuit designer.

Before joining the EngD scheme, Carol worked for Marconi Instruments, BAE Systems and most recently ECS Technology. During her time with ECS Carol completed her part time MSc with iSLI. She then returned to full-time education after 20 years of full time employment. Regarding her achievement, Carol remarked, I hope that in winning this award it will encourage other people and especially women that it's never too late to return to education.

Carol is instrumental in encouraging women to enter the field of engineering in Scotland. An active member of the Women's Engineering Society (WES) council, which she joined in September 2007, she introduces higher education institutes to the society and promotes WES to Scottish Engineering companies. In addition, she promotes Science and Engineering to young people in Scotland in her role as a Science and Engineering Ambassador (SEA). The aim of the SEA program is to encourage more young people to understand the opportunities that a science, engineering or technology- based career can offer them.

Carol also found time during her career and studies to bring up two children and keep an active social and personal life. Her work has demonstrated that there is a significant role for trained engineers to play in leading edge commercial research. More importantly she is a role model for others considering EngD as an alternative option to further tertiary level education and research.