The future is full of surprises – massive potential for organic electronics

The future is full of surprises – massive potential for organic electronics

The global market for organic electronics and electrics will rise from $650 million in 2005 to $30 billion in 2015, according to a brand-new report from IDTechEx.

Organic electronics involves thin film transistors and displays for electronic products, where the key component is organic and increasingly all printed. It cannot be understood on this narrow basis, however, because we now have organic lasers, fuel cells, batteries, photo-detectors and much more besides, with every prospect that they will be co-deposited using similar inks at high speeds on similar, or the same, equipment. That means lower cost electronics and electrics, with greater reliability due to fewer interconnects and improved tolerance of damage. But the big picture also involves the replacement of most lighting with slimmer, flexible organic alternatives with lower costs and better environmental credentials (Figures 1-3). 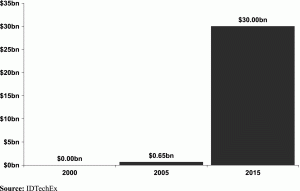 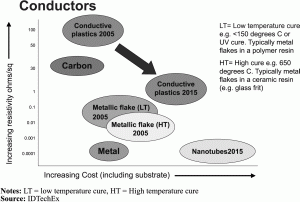 The global market for organic electronics and electrics will rise sharply from 2005 to 2015.

Previous forecasts by several other organizations have proved over-optimistic. Barriers to very large sales such as deposition on low cost packaging material, long life and tolerance of the elements are often proving more elusive than the industry anticipated, though things are now very much on the move and the problems will be overcome.

The IDTechEx figure for 2015 is still a fraction of the market for silicon chips, for example. However, IDTechEx also looks closely at markets in 2020 and 2025. The big picture has to involve a 20 year timeframe because some of this will take a long time. Uniquely, this report encompasses all applications and that vital, long timeframe. Developers of inks, printing equipment and processes can now see the full scope of their opportunity. By 2025, the sale of organic electronics and electrics – typically called organic electronics, because the boundaries are increasingly blurred – will have overtaken that for silicon chips by a big margin of close to $250 billion. That is well on the way to the $300 billion potential that one supplier has declared as the ultimate potential. To give a measure of that size, it is 75 percent of today's global market for all forms of packaging and about double today's market for silicon chips. Partly it is because organic electronics will have a major market impact in such disparate industries as static printed posters and in modernizing lighting.

This organic market increasingly revolves around printed laminar structures, many of which are disposable. These are used for:

Although non-emissive organic displays have a big future, most of the organic electronic displays, billboards, posters and signage will consist of emissive organic light emitting diodes (OLEDs). Indeed, this technology will be the largest part of the market for organic electronics by technology up until about 2020. After that, organic logic and memory will be a bigger business and even start to impact upon sales of silicon chips in a significant fashion.

Mismatch of research versus applications

Currently, there is a mismatch of the number of industrial developers against the potential of the biggest potential applicational sectors as shown in Figure 2.

Although we must be careful not to overanalyze such comparisons, there certainly seems scope for many more players to carve a position in lighting, billboard/poster/signage and logic/ memory – particularly megahertz to gigahertz printed memory. This argument is even more compelling when we look at likely sales of organic electronics by sector in 2020 and 2025. It represents an opportunity for new players entering the industry.

One irony is that the simplest organic device – the printed conductive pattern for interconnects, inductors, antennas and electrodes is making the least progress. The figure below shows IDTechEx forecasts for future progress, which is far from guaranteed. It can be seen that inorganic conducting layers are and will remain ahead in performance – they can be price competitive too. That is another problem that is a big opportunity for talented players in the organic electronics scene because the construction of most electrical and electronic devices calls for the better levels of conductance. Yet only organic layers would be fully consistent with optimal cost and mass production.

Substitution in some sectors, market creation in others

The future impact of organic electronics varies greatly between applications. Contrary to popular opinion, IDTechEx finds that much of the new organic electronics market will be newly created and not replace anything electronic. Where existing electronic and electric products are impacted, the extent will be varied. At one extreme, it will eventually send today's forms of lighting in sharp decline, because of a long list of unique benefits. At the other extreme, it will have little effect on the silicon chip for at least 15 years, because its performance will be poor, with many capabilities of silicon chips not achieved for a long time.

IDTechEx sees a wait of ten years before printed organic microprocessors are sold in volume and even then, they will be of the most primitive sort. However, printed organic transistor circuits will achieve substantial sales in little more than five years largely by doing previously impossible things; such as the disposable skin patch that delivers drugs in prescribed amounts at programmed intervals, electronics on packaging and much more.