On its way towards achieving the Euro 4 standard by 2005, the automotive industry is developing a number of innovative electronic applications aimed at reducing the NOx-type gas emissions of automobiles down to the required 0.25g/km. Among these, exhaust gas recirculation (EGR) systems, on the prototyping and industrialisation of which automotive suppliers have been working on for many years, will now be implemented in a large number of new models of vehicles (Plate 7). 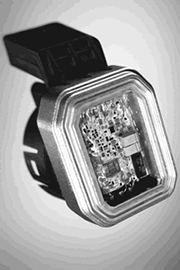 The EGR unit, which re-circulates exhaust gases into the combustion chamber, consists basically of two parts: a valve, an electrical actuator and the electronic unit, which controls its operation.

Temic, a continental company based in Nuremberg (Germany), has developed and tested a control circuit for EGR applications featuring advanced thick film resistor technology and fine line interconnects (150µm). As with all under- the-hood electronics where temperatures can range from 40 to 140°C, control circuits are subject to thermal stress and have to withstand constant vibrations of up to 40g. To manufacture their circuit, Temic have chosen DuPont dielectric materials, conductors and the new 2000 Series of resistors. The German company has a long experience with DuPont material systems and has chosen them for their superior reliability, a fundamental advantage for all applications operating in harsh environment.