This event hosted two Conferences: the 6th European MultiChip Module Conference and introduced the brand new "Microsystems Packaging 2000" conference and the Tutorial "CSP + HDI = MCM-L" presented by Dr Charles E. Bauer of TechLead, USA. Both Conferences had wide industrial attendance with speakers and attendees from East and West Europe as well as Japan, Korea and the USA (Plate 1). The events were also good platforms for European Union initiatives. 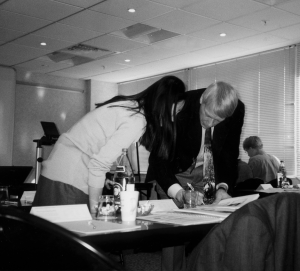 The table-top exhibition was well subscribed, but the split into two exhibition rooms and separate catering location was not at all satisfactory. This has been corrected for the return in 2001 of MicroTech 2001, which will be held in a dedicated Exhibition suite of the Champagne Suite at the Novotel, West London. The Exhibition will be a non-shell-scheme small exhibits event, to respond constructively to the requirements of IMAPS Exhibitors.