Three chips stacked in one housing

Three chips stacked in one housing

Sharp Electronics claims that it has developed the world's first three-chip stacked CSP (chip size package). Mass production began in August 1999 (Plate 3). A production system capable of producing one million chips a month will be available in the first quarter of 2000. This product is aimed at the cellular telephone and the information and communications handheld terminal market. 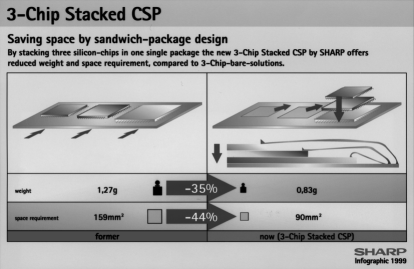 The newly developed three-chip stacked CSP is based on Sharp technology using special thin silicon wafer layers and especially modified die and wire bonding. Three individual chips are arranged in a stacked structure within a single package, with the result that products can be made lighter in weight and with reduced space requirements for mounting chip packages. In addition this new development has made possible next-generation compound memory products by putting three individual memory chips in a single package, a modem controller together with a flash ROM and a normal RAM chip as well as new advanced system-on-a-chip IC in which a cellular telephone control IC, flash memory and SRAM are integrated into a single package.

"In addition to saving space in small appliances the 'three-in-one design' will make circuits more reliable and allow faster operation due to shorter connection wires", says Stefan Haul, Product Marketing Manager, Microelectronics Division at Sharp Electronics (Europe) in Hamburg. "Weight and mounting space are estimated both to be cut in half compared to three discrete chips in separate packages". As the package height is at a maximum of 1.4mm, it may also replace existing two-chip stacked designs, which Sharp has been delivering since April 1998.