[The International Librarianship column of Library Hi Tech News is devoted to discussion and publicity of library conferences and events occurring on a global basis. It particularly attempts to portray library activities and developments in locales outside the UK and the USA. Column editors are Victoria Spain and Les Pourciau.]

One of the major necessities for the development of education, science and culture in Uzbekistan, and for the furtherance of its social and economic progress, is operative access to necessary information as supplied through the systems of libraries and information centers of scientific and technological information (see Plate 1).

The conference objective and focus was to develop international cooperation for establishing library information resources, and the use of the Internet and advanced information technologies in the fields of science, education, culture and business. The working languages of the conference were Uzbek, English, and Russian, and the range of topics included:

Each of the presentations made during the topical sessions above emphasized the integration of efforts of scientists and experts in the field of information technology and librarianship.

In attendance were about 200 participants from all the regions of Uzbekistan, and also representatives from the USA, Russia, Kirghizia, the UK and Georgia. Participants included directors and employees of libraries, scientists and experts from research institutes; representatives of the State Committee of the Republic of Uzbekistan for science and engineering; the Ministry of Culture and Ministry for Foreign Economic Relations; high school teachers; directors and employees of commercial companies; manufacturers of program production and databases; as well as representatives of publishing houses. More than 70 reports and messages were presented.

Librarians can collaborate with specialists working in the sphere of development of automated systems and databases, and the development of advanced methods of library business. But librarians also must communicate with professionals in other areas, as the creation of library information resources is not only a problem for libraries. It is also of vital importance for everyone who is going to live in a civilized society, and who aspires to knowledge and to progress.

One of the important tasks of the Central Asia ­99 Conference was the activation of rapprochement between two important activities: the library sphere and that of information technology. Only such a cooperative effort can produce effective results for the development of the library sphere, for providing operative access to library information resources and knowledge sources. It will affect the development of education, culture, science and business.

The conference was conducted in an untraditional manner. The section sessions were in the first half of the day, where the experts of information technology and libraries delivered their reports. There were two sections at the same time. The first section was "Information Technology and Information Resources". The second section was "The Role of Libraries in the Development of Culture, Science, Education and Business." Experts from the USA, Georgia, and Russia told about their experience in the organization of library business and the applications of new technologies to the library process. Small groups worked in the second half of the day, where the various urgent themes concerning the development of library business and information technologies were discussed. "Automation of Library Processes", "Availability and Safety of Library Funds" and "Legal and Business Information Centers on the Basis of Public Libraries" were the basic themes of this discussion. The content of these sessions was stimulating. Each expert expressed an opinion on the given theme, independent of any particular professional area of expertise. There were many actual questions and identification of problems concerning the development of library business and the creation of information resources. The participation of the scientists in information technology, librarians, and representatives of commercial companies in this discussion was especially important.

Such a democratic setting for the conference allowed discussion of the development of library business, the application of new information technologies, and directions to be taken to maximize the interface of these.

At the conference, experts from the International Library Information Analytical Center (ILIAC) and the State Public Scientific and Technical Library from Russia carried out an educational seminar about the automated library system IRBIS (see Plate 2). This system meets the international requirements and standards on the transfer of bibliographic information and has been introduced already in Tashkent and Samarkand's central libraries.

Throughout the conference presentations were made that are important for the Republic of Uzbekistan and for international cooperation. 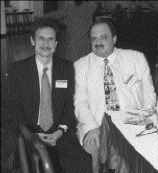 In recent years, the libraries of Uzbekistan have been actively exploring new technical opportunities and methodologies. For the successful accommodation and utilization of these advances a large financial investment is needed. Libraries, even the largest, have financial difficulties, and no development of uniform library strategy will take place without a certain consolidation of efforts, The experience of the Republic of Uzbekistan has been that of operating in various and sometimes not complementary directions. Nowadays it has become necessary to recognize the responsibility and role of the Republic's Main library for consolidation of professional interaction in forming a national library policy, a point emphasized in a presentation by Abdulsalom Umarov, Director of the Navoi Public Library.

It is impossible to overestimate the role of Uzbekistan's State Library in the life of our country. For 130 years, this library has been independently carrying out a great mission of storing and preserving the heritage of the Uzbek people. As the National Library of Uzbekistan, it is open to all citizens, and assumes the role as a research and methodical center for the Republic's other libraries.

The important factor in designating this library "national" is the nationwide character of its activity, and its role in the formation of library policy and traditions. Characteristic of this role for more than a century has been the meeting of spiritual and information needs, and the promotion of the development of national culture, science, and education.

"As institutions everywhere look to information technology to provide answers for more inexpensive delivery of instruction, they are also implicitly looking toward increased utilization of digital information resources to support student learning. It is a given fact that there is a stronger need to learn methods of assessing the quality of information resources in an electronic mode than in a format of ink and paper. It is mandatory that the faculty and administrations of educational institutions adopt means to assure that students, upon completing their programs however offered, are information literate persons. Indeed, as Uzbekistan attempts to position itself to enjoy a robust economy and a better life in the twenty-first century, it is absolutely necessary that it develops an educated citizenry. One of the prime requirements in achieving this goal is assuring that citizens of Uzbekistan are information literate persons." This was the central theme of the presentation by Lester Pourciau, retired Director of Libraries at the University of Memphis in the USA (see Plate 3). 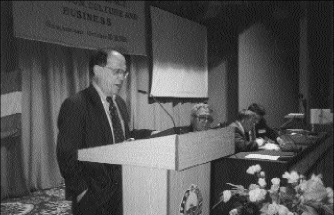 Today, the demand for legal information in Uzbekistan is great. In Tashkent, several departmental libraries and two open libraries satisfy this need. In other districts of Uzbekistan, it is still a problem. Contacts with NGO districts have shown that people of the NGOs are interested in such information. The purposes of the "Electronic Legal Library" project are:

Currently, a new law project, "About Legal Protection of Topology of Integrated Microcircuits," is underway.

One of the main goals of the state policy of the Republic is the design, maintenance and development of information resources.

RNSTI and the Virtual Library

One of the important efforts in the development of library processes in Uzbekistan is the creation of the Republican Network of Scientific and Technological Information (RNSTI). The main activity of the State Committee for Science and Technology of the Republic of Uzbekistan is focused on the integration of scientific databases ­ the implementation of international standards for describing and representing bibliographic data.

Forming a nucleus of the RNSTI are those organizations which have the basic information resources. These are the State Fund of Science and Technology Information with the Republican Scientific and Technical Library, the Fundamental Library of the Academy of Science, the State Library, the Patent Department of the Republic of Uzbekistan, the Library of the Tashkent State Technical University, Tashkent State University, Medical and Agricultural libraries, and the institutes of the Academy of Sciences. The Information Centers of Ministries, departments, and regional centers functioning in the districts of the Republic, soon will be connected to the RNSTI.

A new theme in the development of libraries in Uzbekistan is the creation of virtual automated libraries. The virtual library is a library equipped with computers and information equipment for fast access and transfer of information. It is a library that distributes information by modern methods. The virtual library will provide business journalists, economists and reviewers with information about events occurring in the country and abroad, and with news of social and economic life. It is crucial for the development of economic and democratic reforms in the Republic of Uzbekistan. A Virtual Library is being developed in the Agency of Financial News with the support of the "Eurasia" fund. This virtual library will contain the following material:

The Central Asia ­ 99 Conference defined the basic priorities of the development of library business and the creation of library-information resources in Uzbekistan:

In order to meet these priorities, collaborative efforts will focus on several activities:

The conference emphasized the preceding recommendations for the development of library business and for library information resources in Uzbekistan. Taking into account the overall performance of seminars, training, sections, round tables, and presentations that were carried out within the framework of the conference, the participants supported the idea of holding similar conferences at least annually. They also agreed that seminars and roundtables should be held quarterly to discuss the safety of library funds, and the automation of library processes for the libraries of Uzbekistan.

At the end of the conference, during questioning of the participants, more than 90 percent of the participants expressed support for the conference by specifying its importance and efficiency. In the evaluation unit, "your recommendations for the development of library information resources and libraries in Uzbekistan," the majority expressed the need to develop a legislative-based organization with regular study courses and seminars on the application of advanced information technologies in libraries; 98 percent responded that the theme of the next conference, "Central Asia 2000: Internet, Libraries and Civil Society", would be of vital importance to them. We plan to hold the conference in Tashkent in October 2000.

The purpose of the conference was to unite the people of different professions having various world outlooks, but actively participating in the creation and exchange of information resources in the spheres of science, education, culture and business for effective and productive cooperation on carrying out the conduct of civil society.

The conference was important in several senses but especially for:

The conference analyzed and explored the modern condition of library information resources in the Republic of Uzbekistan, and the experience of foreign countries in this direction. It raised questions about the development of libraries, the condition of library business and the introduction of new information technologies. It demonstrated the large and responsible role of libraries in the development of science, culture, education and business. The conference ascertained that operative and unobstructed access to the information is possible only by using the newest information technologies, and the qualitative progress in professional consciousness of everyone who is connected by library business and the creation of information resources.

Marat A. Rakhmatullaev is the Director of the Department of the Uzbek Foreign Economic Information and Commercial Center, the "UZINCOMCENTER" of the Ministry for Foreign Economic Relations of the Republic of Uzbekistan. maratr@uicc.mfer.uz