Speeding up production is not something commonly associated with cheese manufacture – its very nature is that it should take time to mature for ultimate flavour. However, when production output is 350,000 tons per year, maximising the efficiency of packaging becomes a core issue. This is the case for Friesland Foods Cheese, one of Holland’s longest established producers of cheese.

KH de Jong, part of Friesland Foods Cheese, and one of four Friesland packaging facilities in Holland, use FANUC Robotics robots on three packaging lines. Over 350 tons of Edam, a traditional ball shape cheese produced in three sizes of 1.9, 1.7 or 0.9 kg, is packaged per week.

Delivered to the facility on trays carried in transportation racks, the cheeses are allowed to mature before the packaging process begins. Each tray has capacity for 35 cheeses and ten trays are carried in each rack.

When cheeses have reached the specified maturing stage the rack is delivered to a buffer area at the start of the packaging line. The buffer area has capacity for five full and five empty racks and automatically shuttles them into the de-palletising area.

A FANUC Robotics R-2000iB (Figure 2) takes one full tray from the rack and places it onto a fixture where it then uses seven vacuum cups to locate a complete line of cheeses. The cheeses are then accurately placed onto a conveyor with individual locations for each cheese. Empty trays are then returned to the rack and the process begins again. 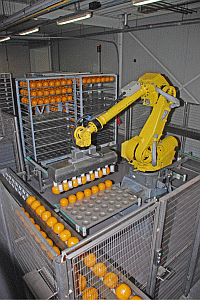 Christiaan Hallers, Project Manager, KH de Jong, explains. “The first stage ensures the racks are always positioned correctly for de-palletising prior to being coated in the paraffin wax machine.”

This process relies on several intelligent features of the FANUC Robotics controller to ensure effective operation. Collision detection is very important when removing the tray from the rack. As the racks are used to transport the cheeses from factory to factory, they can get damaged and we need to detect any indication of a stuck tray. Bernard Bakker, Head of the Technical Department explains: “The torque of the robot’s motors are continually monitored and any increase above expected torque within a programme is sensed and the robot stops instantly.”

Other features include being able to sense that all cheeses have been picked up with the vacuum grippers – if a cheese is left on the tray the robot is aware and returns the tray to the rack slowly to avoid dropping the cheese. Also, as the cheeses are not a uniform “ball shape”, the robot is able to perform a “human like” wrist roll motion over the cheese to ensure a good contact is made with the vacuum gripper. This roll motion also ensures cheeses do not stick to the tray.

Sensors on the conveyor provide a count to the robot to indicate the next available position to deposit the seven cheeses – this ensures the conveyor is kept full. The conveyor transfers the cheese to a paraffin wax coating machine that produces the familiar Edam coloured protective coat.

After coating and in most cases wrapping in cellophane and labelling, the conveyor delivers the cheese to a FANUC Robotics M-710iC robot which has a specially engineered gripper with six individual pneumatically operated “finger type” grippers. Picking up three cheeses and rotating 180° to pick up another three the robot then places the six cheeses into a freshly erected box. Rotating through 180° ensures that the labels are always positioned towards the outside of the box to avoid damage from contacting the top edge of the cartons internal separator.

Full boxes are released from the loading area and proceed to a FANUC Robotics M-410i palletising robot at the end of the line.

Christiaan, continues, “Using the M-710iC robot for the process of placing the cheeses in the box has helped greatly – in particular the robot is able to change its own gripper which weighs 40 Kgs. This was previously a two person job and took a lot more time.”

The line has made a significant impact on productivity at KH de Jong and labour cost has been driven down. Christiaan explains, “We operate two shifts and labour cost savings equate to 500 hours per week, in addition productivity has increased by at least 10%. The system has provided us with a maximum capacity of 3,600 cheeses per hour per line. Handling the trays was a potential injury risk area as the metal trays can get damaged and arrive with sharp edges. Also quality has improved and, as the cheese is no longer handled manually, hygiene is maintained.”