Manufacture of rail freight wagons for transporting coal and iron ore has been automated and made considerably more efficient and less arduous at Transwerk's Wagon Build factory in Bloemfontein, South Africa. It follows the company's e1.5 million investment in three more computer-controlled, gantry-type robotic welding cells from Motoman, bringing the total on site to five.

Installed mid 2007 and measuring 37.5m long by 8m in width and height, the latest cell is said to be the largest gantry robot system in the southern hemisphere. It was delivered from Motoman in Sweden to Bloemfontein in six 40-foot containers and took one month to install and commission (Figure 4). 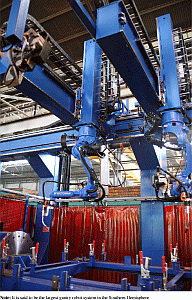 The system has 20 synchronised servo axes, two of them controlling a pair of 20 tonne capacity, rotating positioners and tailstocks. They are capable of manipulating a 7-tonne steel chassis for a rail wagon through 3608 while two suspended HP6 six-axis Motoman robots complete the welding cycle. The robots work independently and simultaneously, carried on slides that provide three additional degrees of freedom.

Wagon assemblies are first tack- welded and then loaded onto one of two workstations in the gantry system (Figure 5), allowing automated arc welding to start immediately while the previous fabrication is unloaded. Motoman Tough-Gun torches are used, fed by GMAW welding peripherals supplied by SKS, Germany, including a pulsed digital inverter. The system also includes seam finding and tracking, data logging and process control. 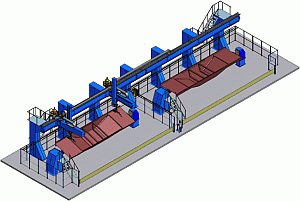 Wagon Build manufactures and delivers up to 500 units per year to international markets, not least its own, with over 100 million tonnes of freight transported through South Africa annually by rail on some of the world's longest trains. Many wagons are of bespoke design to meet the specific needs of customers, which include companies transporting goods such as cement and fuel in addition to coal and iron ore.

Commented Managing Director of Motoman Robotic Systems South Africa, Terry Rosenberg, “The majority of our welding systems in this market are working in automotive- related industries, but we are becoming increasingly involved in heavy fabrication.”

“There is a shortage of experienced labour, so more and more companies are using automated machinery to do the work of skilled operators like welders.

“Another factor contributing to the increase in manufacturing automation is that South Africa is keen to become globally competitive, and for that to happen, products need to be of high and consistent quality.

“However, this must be achieved efficiently and economically to world- class standards, which points towards the use of robotic equipment, particularly for welding.”