Festo, in conjunction with the Berlin- based bionics research company Evologics GmbH, has developed a unique remote-controlled fish, whose form and kinematics are modelled on the movement patterns of the manta ray. Known as Aqua_Ray (Figures 2 and 3), the fish uses an innovative water- hydraulic drive unit coupled with Festo fluidic muscles to produce smoothly- flowing muscular movements, which are transformed into the dynamic flapping of a wing to propel it through the water. Created primarily to demonstrate the design flexibility of fluid power, the artificial manta ray provides a highly manoeuvrable remote sensing platform, with potential applications in marine research and for inspecting undersea pipelines and cables. 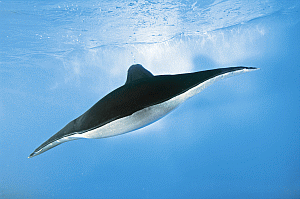 Figure 2 Aqua_Ray: the new remote controlled fish developed by Festo in conjunction with the Berlin-based bionics research company Evologics GmbH. Aqua_Ray's form and kinematics are modelled on the movement patterns of the manta ray 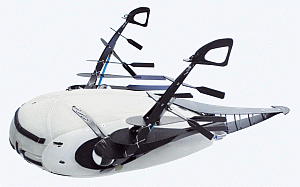 The analysis of movement through water has established that rays are perfectionists in submarine “flight” and gliding. The up-and-down motion of their pectoral fin in water closely resembles the flapping of a bird's wings in the air. This wavelike movement perfectly combines maximum propulsion with minimum energy consumption. The streamlined form lends graceful movement to the manta ray, in particular, and makes it a veritable submarine acrobat.

The Aqua_Ray uses Festo fluidic muscles as actuators. These consist of hollow elastomer tubes with integrated woven aramide fibres. When the muscle is filled with fluid (air or water), its diameter increases and it contracts longitudinally, giving rise to smoothly flowing elastic movement. In conjunction with Evologics' patented Fin Ray Effect®, the fluidic muscles constitute Aqua_Ray's central propulsion and control unit. The Fin Ray Effect is derived from the functional anatomy of a fish's fin and almost perfectly imitates the mode of propulsion executed by the natural model. It is entirely due to the mechanics of the bony rods that constitute the fin's supporting structure that the wing can be arched to ensure even distribution of forces; this makes for a highly efficient drive mechanism.

Like a heart, Aqua_Ray's water- driven central vane cell pump generates the propulsion energy. This is conveyed in the form of pressure via specially developed valves to three opposing pairs of fluidic muscles.

Their contraction force is transferred by high-strength artificial tendons to the wings and the tail, which in turn transform the tendon travel of 55mm into a vertical wing amplitude of more than 550mm.

Through the use of new elastic materials for all moving components and the 3D-deformable skin, and by matching the elasticity and self-adaptive characteristics of the internal wing and tail structures to the hydrodynamic forces, it has been possible to reproduce the kinematics of nature's marine model.

The change in direction of force effected by the tendons makes it possible to relocate the dorsal and thoracic muscles to the side, providing more room for energy storage and transformation components along with the control and sensory units. The requirements regarding technology and performance efficiency such as payload could thus be reconciled with the biological advantages of aquatic movement.

Aqua_Ray is highly manoeuvrable and can be operated either as a hydrostatic glider or with actively flapping wings. This makes for considerable energy savings. Owing to its form and its mode of propulsion, Aqua_Ray is suitable for application in diverse fields of marine research without disturbance to the natural environment. Its smooth contours and lack of rotating parts such as propellers make it particularly suitable for use in environmentally sensitive areas.