Carnegie Mellon University's National Robotics Engineering Center (NREC) in the School of Computer Science's Robotics Institute is unveiling a unique unmanned ground vehicle that offers new strength, mobility and autonomy features for the Army's effort to keep its troops out of harm's way. The 6.5 ton “Crusher” (Figure 2) combines the strength and mobility of a predecessor known as spinner with NREC- developed autonomy capabilities to create an extremely robust, unmanned vehicle that can function on its own in challenging off-road terrain. The project is known by the acronym UPI, which stands for unmanned ground combat vehicle PerceptOR Integration. 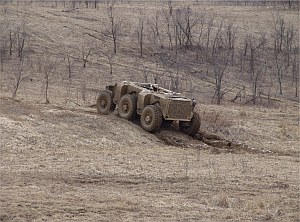 The UPI project, which includes extensive autonomy development, payload integration and field-testing, is funded by the US Army and the Defense Advanced Research Projects Agency (DARPA) at an expenditure of $35 million to date. Experts say UPI incorporates technologies 6-10 years ahead of its time and provides an unprecedented glimpse into the future capabilities of unmanned military vehicles. The technologies developed for Crusher also have potential for commercial use in areas like construction, farming and mining. Since Crusher and its predecessor do not have to accommodate human crews, their novel designs offer unequaled ruggedness, mobility and payload-carrying capacity compared to manned vehicles in their weight class. Crusher's hull is made from high- strength aluminum tubes and titanium nodes protected by a steel skid plate that can absorb shocks from impacts with rocks or tree stumps. Its unique suspension enables it to move smoothly over extremely rough terrain and overcome obstacles like large ditches, man-made barriers or piles of boulders. It can carry more than 8,000lbs. of payload and armor. Electric motors embedded in each of the vehicle's six wheels are powered with a hybrid system that uses a turbo diesel generator to recharge its batteries. Its top speed is currently 26 miles per hour.

NREC researchers have been working with several subcontractors to develop Crusher's special attributes. Among them are Timony Technology of Meath, Ireland, which developed the suspension; Pennsylvania-based CTC Technologies, which designed the hull; and SAFT America Battery Co., which built Crusher's lithium ion battery. “We're developing Crusher to provide technology insights to the broader Army community to show people what can be done and pave the way for the future,” said John Bares, Director of the NREC and UPI Principal Investigator. “Although it's not being designed for production, Crusher could be matured further to withstand the rigors of military fielding.”

Bares predicts that vehicles like Crusher will first be used in convoy or support roles, then tactical roles. “In five to 10 years, we should see robots working alongside our troops to protect them and help with tasks in the field,” he said. “The Crusher vehicle is a natural outgrowth of more than 26 years of field robotics research conducted at the Robotics Institute,” said Randal E. Bryant, Dean of Carnegie Mellon's School of Computer Science. “Crusher demonstrates how advanced vehicle and navigation technology, developed in a university research environment, can be refined into high-quality engineering prototypes. This technology will find many applications where reliable transportation must be provided in difficult or dangerous environments.” Crusher will undergo extensive field tests under the purview of the Army and DARPA every quarter for the next two years. Much of the emphasis will be on increasing its autonomy capabilities. It is expected that the Crusher platform will influence unmanned vehicle design efforts funded by the Army's Future Combat System.

The NREC was established in 1994 with a $2.5 million grant from NASA's office of advanced concepts and technology to commercialize mobile robotic technologies the agency and other research institutions had developed by working directly with American industry. Since then, the NREC has grown into an organization employing more than 125 scientists, technical staff, graduate students and support personnel, with an annual budget exceeding $20 million.

Videos and images of Crusher and more detailed statistical information may be accessed at the NREC web site: www.rec.ri.cmu.edu