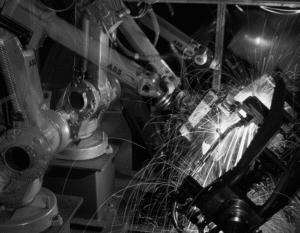 In automotive manufacture an important factor in the success of producing any new model is the cycle-time for the production line. AC&E, the author of CSR simulation software, has developed an interface to RRS providing a standard interface between the robot manufacturer's motion control and the simulation vendor's simulation system. Taking into account the special features of a robot, including real factors such as joint performance and wear; AC&E is able to achieve accuracy far exceeding the industry norm of 5 percent.

CSR, currently in use with several automotive companies and their key tier 1 and 2 suppliers, is used for simulation and offline-programming of a wide variety of robot types. CSR can handle and link in sequence multiple robots and accurately predict reach, and cycle-times.

One of the largest producers of robots, ABB, has used CSR with their RCS (ABB's implementation of RRS) at their robot manufacturing facility in Vásteras, Sweden to see how close CSR could predict the actual observed cycle-times of a real robot under controlled conditions. The results, however, were impressive, and showed CSR using RRS was within 1.2 percent of the actual values. CSR performed the best of the simulation systems under test. “As several large automotive manufacturers and their immediate suppliers try to select appropriate software for their all-important robot simulations, there is a constant requirement to correlate the accuracy of the predictions, obtained from the simulation, against the actual observed performance of the robots. Engineers now have the opportunity to achieve a far higher correlation between simulation and actual cycle times by using CSR”, says Stewart Allinson, Managing Director, AC&E.

CSR has several other features making it popular for simulation and offline programming. For example, CSR's fast, intuitive interface makes it easy for robot engineers to learn and operate. It runs quickly on PC, and can handle multiple robots linked in their simulation, exactly as they would be in the real workcell. For quick calculations, as a simulation is developed, CSR's path planner is able to predict cycle-times within 10 percent of the subsequent actual reported times.