ABB, the global power and automation technologies group, has moved one step beyond consumer-based Bluetooth technology as used in the latest generation of mobile phones – developing and employing a wireless system in a real manufacturing situation. The system is located in one of the Group's German-based production facilities, where ABB robots are automatically assembling tripping units to ABB MS116 manual motor starters – controlled and monitored by ABB's wireless proximity switches which are activated by radio waves (Plate 2).

Ever since the first industrial robots were introduced by ABB in the 1970s, power and control cables have, to some extent, been restricting their versatility and reliability. Following every movement of the robot arm, the cables are twisted and turned, and exposed to severe mechanical stress. Though ABB has gone to exhaustive lengths to combat this, cable failure remains the most common cause for downtime on industrial robots. 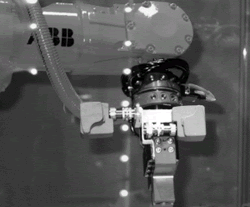 Cable failure may be a thing of the past though with the new wireless technologies, and ABB is leading the way. Wireless proximity switches have been in use since Spring 2003 at the German plant, and brought considerable benefits including a reduction in wiring costs and the elimination of the hazards of broken cables.

The true challenge facing ABB was not transmitting the data, but finding a suitable energy source to power the transmitter. Batteries, solar cells and fuel cells were found to be impractical, and the researchers finally developed a power supply using a magnetic field, created by looping a series of electricity cables around the perimeter of the manufacturing site. Tiny coils were placed within the sensors to pickup energy from the field and convert it to electrical power. The power arrangement provides a sufficiently strong electromagnetic field, and, because the field is rotational, the sensors can be moved and arranged freely in the area.

ABB's developments in wireless technology have not gone unnoticed, with the group recently carrying-off the coveted Wall Street Journal Europe Gold Innovation Award on no less than two occasions.

David Marshall concludes: “The productivity and thus the financial benefits of robot-based manufacturing are already well documented, however, with the advent of wireless technology, the rewards for investing in such operations in the future will be even greater”.