Conventional robot arms were initially designed for spot welding, with traditional ratings restricted to 125/150 kg capacity. These were adapted to higher payload models using a shorter arm. Not so with the new SMART NX1 range from Comau, which are custom designed to handle up to 800 Kg at 3.8 m radius of reach. This is believed to be the largest design of articulated robot being manufactured. In this respect, this robot is believed to be the world's first.

Apart from improved payload, two further benefits of the design are particularly noteworthy. First, the overall dimensions of the robot are extended and more exactly defined, making it possible to reach further with the higher payload. This allows new applications to be considered without the need for additional (external) axes. Secondly, as there is no risk during handling of the workpiece – the rating at 600 kg means that overloading is unlikely to be experienced. For the same reason, downtime for maintenance is virtually eliminated.

The 6-axis articulated SMART NX1 can support 600 kg on the wrist to its nominal reach of 3.0 M. The robot is also available in a 4-axis version, which can support 800 kg capacity. Repeatability has been improved from earlier models (0.1 mm) with the fast flexible movements, with wrist movement of 2,7008 at 1138/s.

Several of these robots have been sold and installed. The first of these being as a buffer storage system for car plants, with the robot capable of lifting complete car bodies. Other applications include cooperative welding (where the NX1 moves a car body and another robot performs welding operations allowing to remove any geometry fixtures), palletising complete layers of canned food and stone slabs (Plate 4). There are several handling applications where the robot gripper, or “hand” deployed on the end of the robot arm, can weigh in excess of the product being handled. This is prevalent in such applications as bottling plants with multi-functional heads. Comau believe that it is currently a challenge to system designers and machine integrators to come-up with new applications for these robots – opening new fields for consideration, which have not been opened earlier to explore. 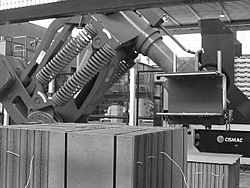 Comau, part of the Fiat group, has a pedigree unrivalled in the supply of robotic welding systems to automotive companies. Comau have a large resource of skilled personnel worldwide, so information and technical knowledge is always readily at hand. More than 20 vehicle manufacturers use Comau equipment in 78 facilities throughout Europe, America and Asia. One in three car bodies worldwide is spot welded on Comau lines, which execute over 72 million welds per year. In the UK this means operating from five locations spread across the country. Comau Estil is capable of full service supply, which realistically means Comau can offer the complete design, manufacture, installation and also the maintenance of the components supplied and of equipment already in use from other suppliers.