NASAs “Spirit” Mars exploration rover successfully landed on the Red Planet on 4 January and the second rover “Opportunity”, on the 25th of the month. Each mission features 39 maxon motors (Plate 2).

Having provided the drive motors for the “Sojourner” rover in 1997, maxon has been heavily involved in NASA's current expedition to Mars which began on 10 June 2003. The two identical rovers, Spirit and Opportunity, will explore different regions of Mars to find out more about its geological conditions. The expedition's key task is to study the surface for signs of the existence of water. 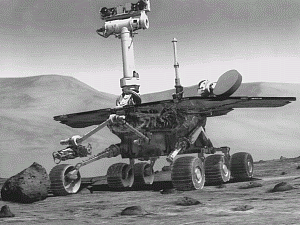 The decision to use maxon motors was based on their excellent performance in the “Pathfinder” rover, as well as their extremely high efficiency level – 80 to 90 per cent – which far exceeds other motors of this type.

The motors themselves are standard products with diameters of 20 and 25 mm and only needed minor modifications to deal with the extremely harsh conditions. The equipment had to be able to withstand enormous temperature changes on the surface of Mars – which can range from around −120 to +25°C – as well as the vibrations and the special atmosphere.

The motors are used for operation of the robotic arms, rock drills and steering mechanisms, for controlling the cameras and for turning the six high-tech wheels that drive the heavy rovers (each weighing nearly 180 kg) around the planet's surface.

The new rovers are much larger than their predecessor, the Sojourner, and with an average speed of around 1 cm/s (36 m/h) they are also around ten times faster. They are expected 10 travel up to 40 m per “sol”, or Martian day roughly equivalent to the distance the Sojourner covered during its entire 90-day mission.