Pioneers of the robotics industry joined the Industrial Robot to celebrate 30 years of publication at a lunch aboard HMS Belfast in London. Dr Clive Loughlin, editor of Industrial Robot, hosted the event. The guest of honour was Joe Engelberger, the “father” of robotics. Among others present were British pioneers Doug Hall, Wilf Heginbotham, Mike Skidmore, Tom Brock, John Collins and John Mortimer (Plate 1). 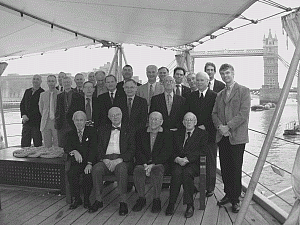 Looking back at the early days, the pioneers remembered good and not-so-good times in the history of robots. When Tom Brock, chairman of IFS Publications, launched the Industrial Robot magazine in 1973, industry's acceptance of robots was far from assured. In the magazine's first editorial, the guest editor wrote that Material Handling Units (MHUs) and not robots should be the topic being discussed. Tom Brock then invited Joe Engelberger to write the next editorial. And this put the magazine on a firmer footing.

By 1981, the industrial robot market was beginning to arouse considerable interest in the UK. It was the year that Tom Brock created the first Automan conference, attracting more than 800 participants. So numerous were the visitors to the exhibition that took place alongside the conference that the doors had to be closed for fear of fire risk. The exhibition was organised by Andrew Dedman, also a guest at the pioneers' lunch.

Many of those who follow the robotics industry still have mementos of the first Automan Exhibition in Brighton. Margaret Thatcher, then British Prime Minister, opened the event with the message to industry to “Automate or Liquidate”. And Joe Engelberger's Puma robot then being launched onto the market was exhibited in an “artistic” application. It drew caricatures of Margaret Thatcher, and anyone else willing to pose, for the visitors to take away.

In 1983, the Duke of Edinburgh who was invited to contribute a Foreword to the publication celebrating 10 years of the Industrial Robot echoed Margaret Thatcher's sentiment. He urged UK manufacturers to invest in the rapidly developing robot industry and to thereby create wealth and employment at home. Although major trade unionists spoke out against automation in public because of associated job losses, Mike Skidmore says that they were privately of the same view, believing that robotics enabled manufacturers to stay competitive and thereby ensured some job retention.

Meanwhile back in the laboratory and down on the factory floor, robots were being put through their paces with sometimes unexpected results. At Wilf Heginbotham's research laboratory at Nottingham University, a robot undergoing overnight trials created a massive hole in the floor. Programmed to pick up bags and then put them down, the robot's gripper had become detached from the robot arm and the robot was repeatedly smashing the gripper into the floor. In another incident, according to John Collins' recollection, a cleaning lady fled a laboratory in terror when she unwittingly set off a security robot that had not been unplugged over night. Essentially the robots were doing just what man had programmed them to do.

Robots today are largely the domain of the automotive industry. This is changing little, says Ken Young of Warwick University, the current chairman of the British Automation and Robotics Association. Speaking at the pioneers' lunch, he said that 70 per cent of UK robotics business is still in the automotive industry. Signs that the food, electrical and horticultural industries are starting to show an interest have been reported for the last 20 years so Ken Young does not expect any big movement in the next 4 or 5 years.

However, listen to Joe Engelberger and the message is clear: the only area of significant future growth is that of service robots. With 17 per cent of people in the US employed in manufacturing and the rest in service roles, he is convinced that service robots should be receiving more attention. But, according to Engelberger, the healthcare industry is putting up resistance, and the manufacturers of industrial robots are failing to recognise the opportunity. They are preoccupied with the all-consuming need to fight for market share in their existing sectors. But the technology exists for service robots to become a reality and industry should be getting on with engineering them. According to Engelberger, cheap manufacturing possibilities are becoming available in low labour countries such as India and South Korea where he has recently observed the same level of enthusiasm for service robotics as he encountered for industrial robots in the UK and Japan, 30 years back.

The new pioneers were represented at the 30th anniversary celebration by Jeff Pegman of RU Robots, Brian Davies of Imperial College and Patrick Finlay of Armstrong Robotics, all of whom work in the growing area of medical robotics.

The Industrial Robot journal is grateful to ABB for their generous sponsorship of the event.