The Robotics Industries Association presented the 2004 Engelberger Robotics Awards on the occasion of the 35th International Symposium on Robotics held in Paris in March (Plate 1). The winners are Robert G. Brown, CEO Advisor, DELMIA Corporation, USA (award for Leadership); Renato Caretta, Advanced Research Director (Senior Vice-President), Pirelli Tyres SpA, Italy (award for Application); Pierre de Smet, President, Dynalog Inc, USA (award for Technology) and Claude Laurgeau, Professor, and Director of Centre de Robotique, Ecole des Mines de Paris, France (award for Education). Joseph F. Engelberger, after whom the awards are named and who is often referred to as the “father of robotics” was in Paris to present the awards to the winners together with Ake Lindqvist, President of the RIA, and Group Vice-President, Robotic Products and Automation NA of ABB, Inc. 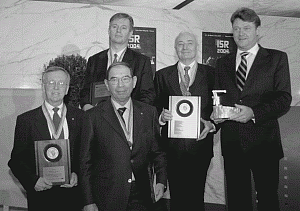 Robert Brown won the leadership award for his contribution to the robotics industry during a career that has included periods with robotics and simulation software companies ASEA Robotics, ABB Robotics, Deneb Robotics, and DELMIA Corporation. For example he helped to increase the use of robotics in the general assembly area of automotive plants by producing robotic-glass systems. He initiated the use of robots in flexible assembly lines in US engine plants and also the large-scale deployment of robots by manufacturers of automotive wheels. Implementing a “lights-out” manufacturing plant for slitting and packaging the majority of the world's X-ray film, he proved the reliability of a flexible robotic material handling system. Brown promoted robotic simulation and off-line programming in such applications as automotive welding and painting, and applications within the aerospace industry, which have been widely accepted and have created new markets for standard robots. He aggressively led industry to use robotics and telerobotics technology in hazardous environments.

Under his leadership, ABB Robotics won the prestigious Chrysler Pentastar Award for Quality. Brown provided leadership and direction as a member of the RIA Board of Directors from 1995 to 2002, including the position of Vice-President. He also served as the founding Chairman of RIA's Special Interest Group, Association for Robotics in Hazardous Environments. Brown is a member of the Board of Directors of the Intelligent Manufacturing Technologies Initiative on workforce development for Oakland County (Michigan). He has served as the US Regional Coordinator for multiple Intelligent Manufacturing Systems (IMS) projects.

The award for robot applications went to Renato Caretta of Pirelli Tyres where, for over 50 years, he has dedicated his career to improving product and process. He is responsible for the development of many key tire-manufacturing breakthroughs including the continuous compound mixing (CCM), which produces the 14 different rubber compositions needed for tire production in a continuous, highly-automated fashion. Another of Caretta's innovations is the ISWG Integrated Software, resulting in the complete integration from tire design to the manufacturing-process specifications.

By inventing a new tire-manufacturing process, called modular integrated robotized system (MIRS), Caretta revolutionised the traditional tire- manufacturing process. MIRS reduces the process from 14 steps to three, and produces a new tire every 3 min. The MIRS process abandons the traditional batch operation and instead builds tires by robots directly around a drum. The drum is passed from one mechanical hand to the next, without stopping and without human contact. MIRS can be set up in about 3,000 ft2 of an auto-assembly plant and make new tires for cars as they come down the assembly line. Additional advantages of MIRS include the reduction of energy consumption by 30 percent, floor requirements of only one-fifth of the space of traditional manufacturing processes, and raw material to finished product lead time reductions from 6 days to 72 min. Today four MIRS factories are producing tires in Breuberg, Germany; Rome, Georgia; Bicocca, Italy; and Burton-on-Trent, UK.

Dynalog's Pierre de Smet, the winner of the Technology Award, has made technical achievement and product contributions that will provide key components in the successful development and implementation of future robotic applications. His contributions, in the area of robot calibration and mathematical/ kinematic modelling of industrial robots, have led to products that dramatically improve positional accuracy and repeatability. The advances provide solutions for robot calibration, repeatability over time, and automated crash recovery. De Smet's calibration technology also has enabled the practical use of advanced off-line programming (OLP). He has received patents for his inventions DynaFlexä FMS “Absolute Accuracy” calibration technology, AutoCalä Robot and TCP recovery, and the DynaCalä Robot Cell calibration system. The application of these products has enabled industrial robots to be used for many new flexible manufacturing applications such as robotic in-line inspection/ gauging, and precision drilling/routing and form-and-pierce technology.

After moving to the United States from his native Belgium, de Smet held the post of Adjunct Professor of Robotics and Vibration at Wayne State University (Detroit) beginning in 1989. He then started Dynalog Inc, which now has offices worldwide. He has been an active member of RIA since 1997, and has participated on several robotics standards committees including ISO and Realistic Robotic Simulation (RRS).

The winner of the Education Award is Claude Laurgeau. He is the Professor in charge of the Robotics Major and Advanced Robotics Systems at the Ecole des Mines de Paris, and is the founder of the Robotics Research Centre, which focuses on perception and control of autonomous robots, resulting in applications for intelligent vehicles. Laurgeau previously headed up research and development at France's national computer science agency where he was responsible for some 60 research activities, including robotics and intelligent mechanization, computer vision, man-machine interaction, and high-level languages. In 2000, he founded a company called Intempora, which developed RT MAPS, innovative prototyping software for real-time application in data fusion of autonomous robots. The software has been selected for use by leading companies, institutions, and ARCOS, the French national research program on intelligent vehicles.

Together with his PhD students, Professor Laurgeau has been the three-time winner of the national competition for innovation in France (1998, 2000, 2001). He is the author of more than 100 papers, articles, and publications on industrial automation including the books Programmable Controllers, Logic and Programming in Robotics, Machine Vision, and Understanding Robotics. Laurgeau also founded and edited the NOVOTICS collection of books on robotics- related subjects and has organized seminars and courses at the national and international level.

The Engelberger Robotics Awards are presented annually by the Robotic Industries Association. RIA, which is celebrating its 30th anniversary, is the industry's trade group representing some 230 North American companies actively involved in robotics. Each award winner receives a $4,000 honorarium and a commemorative medallion. Since its inception in 1977, the award has been presented to 93 international leaders from 14 countries.

RIA is now accepting nominations for the 2005 Engelberger Robotics Awards, to be presented at the 36th International Symposium on Robotics to be held in Tokyo in 2005.