Making sure a robot lines up to a toilet with absolute precision and ensuring that moulds are moved with a smooth motion profile was the key criteria identified by Hoerbiger-Origa when it was called into Kings Lynn-based Porvair Ceramics Ltd (Plate 3).

Porvair Ceramics (part of the Porvair group of companies) is an OEM that builds ceramic moulding machinery and moulds for the sanitaryware, tableware and advanced ceramic industries. The loads and pressures involved in moulding larger items, such as toilet bowls, require that the mould parts have to be reinforced with a steel frame and so can weigh up to 1.2 ton each. Opening the moulds and transferring the unfired, and thus delicate, bowls to the kilns is a task that requires a feather-like touch, despite the huge loads involved. 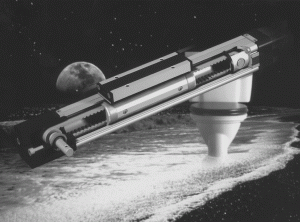 Porvair's pressure casting machines have up to 16 moulds (eight on a toilet making machine); for a toilet bowl, each mould comprises four parts; top, bottom and two sides. These are all suspended from an overhead beam, which forms an integral part of the machine's frame, and effectively move along the beam as each is opened in turn for demoulding the "green" bowls. The support of each mould utilises three carriages, one of which also carries a pneumatic cylinder to raise and lower the bottom mould.

In use, the moulds are closed by a hydraulic ram and clay slurry is pumped into the mould. Air pressure is then applied to form the hollow toilet bowl against the mould's internal surfaces and also to help drain excess liquid from the clay.

De-moulding then involves the sequential opening and closing of each mould in turn. This process is fully automated, using a coupling device that is traversed over the length of the overhead beam by a servo-driven linear actuator.

The actuator is synchronised with the operation of a demoulding robot, which travels along an axis parallel to that of the overhead beam so that it is adjacent to each mould as it is opened.

The actuator is over 6 m long, so when building the machine, Porviar found that the number of potential suppliers was limited. After reviewing the alternatives, Porvair specified actuators manufactured by Hoerbiger-Origa, which has an enviable track record for long stroke, high accuracy units. Working with Hoerbiger-Origa's specialist motion engineers, it was decided to use a servomotor from control techniques, controlled by a dedicated Rockwell PLC, which works alongside a machine-wide PC-based SCADA system.

All the mould suspension carriages on the Porvair machine are connected to one another by a system of scissor linkages. The motion imparted by the linear actuator to an individual mould part is proportionally transferred to that mould's carriage such that when the mould is fully open, the robot is centrally positioned between the two largest mould parts. Additionally, as one mould is opened, the preceding mould, which has already been demoulded, is closed.

The linear actuator also connects four air supplies to the moulds through the carriage engagement tool as they are opened.

Solenoids mounted on the moving carriage of the actuator control a supply of air to the open mould to assist demoulding. Positional accuracy of the linear actuator relative to the current position of the robot is ensured by a laser sensor mounted on its moving carriage and reflectors mounted on each mould's suspension carriages.

Hoerbiger-Origa was a natural choice for Porvair, because it offers all linear actuation technologies that can be completely objective in its assessments and specifications. With both hydraulic and pneumatic systems already specified elsewhere on the machine, these were considered.

However, it decided against pneumatics because of the load and accuracy requirements, and hydraulics were rejected because of cost, speed and maintainability.

This left electric servodrives, with a belt or ballscrew or rack and pinion for rotary to linear conversion. Normally, a ballscrew is chosen for high accuracy, high load work; however, these become very expensive for long strokes and over 6 m tend to suffer from whip. Rack and pinion is problematically due to lubrication requirements (no oil or grease must come into contact with the moulds) and the problems associated with the motor to be mounted on the moving carriage. Fortunately, one of the steel laced polyurethane belt options offered by Hoerbiger-Origa is specifically designed for large load precision accuracy over extended strokes.

The actual model of actuator is the 50BHD. Like all Hoerbiger-Origa units, this is based on a standard aluminium extrusion, being one of the larger ones with a 50 mm diameter internal bore through which the toothed belt runs. This has integral roller guides and bearings and is supplied as a ready to fit mechatronic sub-system.

Although not exploited in this case, the BHD extrusion is so rigid that they are often used as main load carrying members within a machine's frame. Further, the mounting arrangement is such that the configuring multi-axis systems are completely straightforward.