The ability to reprocess and repair worn turbine blades and vanes is a major cost advantage, safely extending the service life of each blade. The Greece based automation specialists, Zenon have designed and constructed a robot cell, built around a Staubli RX130 six axis robot, that performs high precision grinding and profiling, producing an excellent surface finish with the repeatability and integrity demanded in the processing of these safety critical components (Plate 2).

Zenon S.A. are leading integrators of automation systems both for the Greek market and the countries right across the EU. When designing the automation system for the tip repair of turbine blades and vanes, Zenon selected Staubli, specialists in manufacture of high precision robots, to provide the robotics. 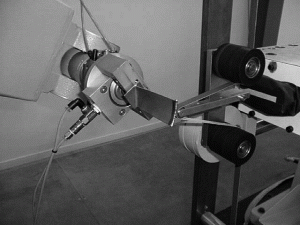 Erosion of the tips of turbine blades and vanes is frequently caused by thermal expansion, producing friction with the turbine casing or shaft. The damaged portion of the tip is cut and replaced by welding new material to the blade followed by grinding and profiling to obtain the precise aerofoil profile required. Traditionally, the welded part has been manually ground to the aerofoil profile. The new Zenon cell fully automates this grinding-profiling operation.

The process and materials technology employed in the automated system is identical to that used manually, i.e. a belt grinding machine fitted with the same grit belts. The major change is that the blade is held by the RX130 robot rather than by hand.

Two major challenges had to be overcome to successfully automate blade grinding.

In order to solve the first problem, Zenon introduced the concept of adaptive grinding. This means that the master path (i.e. the path derived from an undamaged blade) is modified to suit the geometry of each individual damaged blade to be repaired. This was achieved through the use of a co-ordinate measuring machine and specialised software. The need to teach points manually was eliminated since, through the utilisation of scanned geometry and the path programming software, the operator can create the master grinding path off-line, test and verify it as necessary, prior to actual processing.

The second problem was solved through the grinding force servotool developed by Zenon, which used a load cell to measure contact force and allow the grinding belt to retract when high forces were encountered, permitting material removal to the desired path by an iterative grinding process.

The finished cell has automatic safety features built in, it is fully enclosed, preventing anyone from entering the robot working area. The cell controller is housed in an industrial cabinet, allowing access to only the minimum number of buttons needed for the operation. The robot controller is electrically isolated through opto-isolators and relay switches, preventing damage to expensive hardware in case of a short circuit. The emergency circuitry runs through all cabling so that in the event that a cable becomes disconnected or cut, the cell will automatically cease to operate.

The robot used in the cell is the Staubli RX130. This is a six axis arm, with a work envelope of 1.30 m in radius and 18 kg payload. It can move with a speed of up to 10 m/s, with a repeatability less than 25 microns, and an accuracy within a small volume, of up to 50 microns.

The Staubli RX range of six axis robots features high speed and acceleration and the capability to follow complex trajectories even at high speeds. Joint speed ranges up to 1,125°/s. The high degree of accuracy and repeatability makes the RX ideal for the performance of detailed, meticulous tasks. At the heart of each RX robot is the patented, unique, JCS gearbox providing zero backlash, smoothness in movement and consistent, reliable performance. The range includes models with load capacities from 1.5 to 60 kg with a reach at the wrist from 665 to 2,135 mm. The movement in six axis provides an extremely large work envelope. User-friendly software permits easy programming as well as re-programming to bring the added degree of flexibility, often of benefit in automated systems. Model variants have been introduced, specifically designed for applications in the plastics, painting, cleanroom and metrology sectors.

The Zenon robot grinding cell was designed with the ultimate goal of achieving near to perfect finished blade surfaces. The very easy programming of the robot allows an operator to readily obtain up to 80-90 per cent repair of a blade in terms of material removal. The system is designed to leave about 0.1-0.2 mm of material to be removed manually. Every blade has to be manually inspected, if final processing is done at the same time, the additional time required to finish the blade is less than 15-30 s, depending on the material left to remove and the dexterity of the worker.

The shape of the blade profile is correct as extrapolated from the non-repaired part of the blade and the stacking axis is not bent. The robot based system produces zero scrap since it never grinds beyond or below the nominal shape. Normal manual scrap rates ranged from 0.5 to 2.0 per cent, particularly when the blade has been repaired more than once.