The European Commission is providing funding for a collaborative research project called NOMAD under the aegis of its Framework V. Competitive and Sustainable Growth Program (G1RD-CT-2000-00461), autonomous manufacture of large steel fabrications. The project is aimed at the development of technologies to replace the assembly line-based approach to welded fabrication.

The technology will allow "constraints free" manufacturing in which the welding process is taken to the part (as in manual welding) rather than the part moving along an assembly line from one process to the next (as in dedicated robot welding). This concept means that fabricators will not only be able to cope with different product designs efficiently, but will also be able to cope with varying demand by using more or fewer robots as appropriate. The proposed system will result in the removal of human operators from hazardous fabrication environments, also making it easier to contain pollution.

Caterpillar Belgium SA helped to initiate the project, which began in earnest earlier this year. Keith Herman, a senior research and development engineer at Caterpillar is the project technical co-ordinator. He explained: "In the past, our customers were happy with standard products, but now they demand customised parts that are designed specifically to match their applications. We, like other companies, are finding it difficult to deliver these customised parts quickly and economically, with current fabrication techniques. At the moment, the robotic welding of customised parts is inefficient. There has also been a reduction in the number of skilled and trained welders capable of producing these products manually."

Finnish-based Delfoi, a partner company of Delmia, and a specialist advanced manufacturing simulation company, is part of a European team that makes up NOMAD. Delfoi and the NOMAD team will be utilising Delmia's IGRIP as a key tool to enable the automation of robotic weld programming (Plate 5). Welding information will be obtained from the CAD system simultaneously with a "weld planner", which will be especially developed as part of the project. The position and orientation of the part to be welded will be fed into IGRIP via sensor systems that is also being developed within the project. With this information, a model of the cell will automatically be created in IGRIP, with the automatic robot programming to follow. 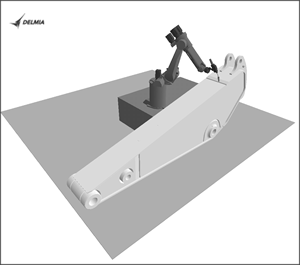 It is envisaged that the resulting system will be an automated fabrication cell capable of efficient and reduced cost production of unique, customised products. Initially, NOMAD will concentrate on large sized steel structures but it is expected that dissemination to other industry sectors will occur before the end of the decade.

Heikki Aalto, Executive Vice President of Delfoi, commented: "NOMAD will cut costs by automating the arc welding process, negating the need for expensive jigs, as the sensor systems will identify a part and then the robot will apply the correct welding program even when they are truly customised, unique products. The technology should also be capable of re-vitalising traditional fabrication industries in Europe – construction, shipbuilding, off highway vehicles, structural fabrication, military vehicles and heavy handling equipment."