ABB Automation's Process and Application Consulting Services (PACS) team, based in Milton Keynes, has recently played a pivotal role in transferring production of Rover's flagship vehicle, the Rover 75, from Cowley, near Oxford, to Longbridge in Birmingham.

The decision by BMW to transfer ownership of the Rover Group – including the Rover and MG brands – to other companies in the UK, resulted in a requirement to transfer production of the award-winning Rover 75. The initial part of the transfer – equipment removal – required a rapid response for both the quotation and the execution of the work, following the awarding of contracts.

Rover Group contacted the original suppliers of all the production facilities to ensure a consistent and professional approach to the transfer of equipment, initially for storage and subsequent re-installation at the new location.

ABB Automation's PACS team, headed by Business Development Manager Peter Burton, with Project Manager Stuart Wayne and a small group of experienced engineers, was initially responsible for relocation of the trim shop robot glazing Cell. The cell is used to apply polyurethane adhesive to front and rear screens followed by fitting of the screen to the body (decking). The whole operation is performed by two ABB robots one for the front screen and the other for the rear (see Plate 3).

The first part of the contract was to decommission and strip-out all the cell elements at Cowley – two IRB 6400 robots, glass handling and centralising equipment, body lifter, screen reject conveyors, adhesive dispensing equipment and vision sensing equipment, and to transfer all to a suitable storage location. The re-installation required a separate quotation, since parts of the transfer process were to be financed by BMW. 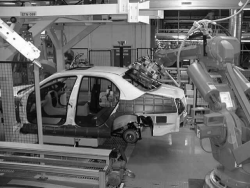 Part way through the contract, Rover Group decided to integrate production of the Rover 45 with the Rover 25 on the same trim track, offering two more business opportunities to the PACS team.

One was to reconfigure the Rover 25 glazing cell – similar to the Rover 75 system, but incorporating IRB 6000 robots – to effect the integration of the Rover 45 (four and five-door models) with the Rover 25. This involved major changes to control hardware and software, together with robot programs. The other was to decommission and remove from site a glazing cell (hard automation), fill a large pit of 112m3 and reinstate the factory floor prior to the reinstallation of the Rover 75 cell. ABB was successful in winning both of these additional contracts.

At a critical stage in the Rover 25/Rover 45 integration programme the original supplier of the vision systems – which are vital for decking operations – declined to provide support. Fortunately, ABB was able to advise Rover Group on an alternative supplier for vision sensing equipment, resulting in a further successful bid for the supply installation and commissioning.

With the contracts valued at over £500,000, the ABB management is delighted with the business acumen and engineering expertise of its personnel. Operations Manager Malcolm Joyce says:

The PACS team made an outstanding effort in winning both the initial and follow-on contracts at very short notice, clearly demonstrating what can be achieved through effective team work and a clear customer focus.

There are no restrictions either. If engineers are capable of performing all roles in a specific set of circumstances, they do, working to the advantage of everyone, particularly the customer.