Chrysler is enhancing its production facilities at their Lago Alberto plant in Mexico to take advantage of the latest technology and has awarded Portable Welders a contract to supply ten integral transformer spot welding guns. The contract has been won in conjunction with British Federal Mexico, and comprises six manual and four robot guns, two of which will be medium frequency models (see Plate 6).

Medium frequency spot welding systems, operating between 500 and 2,000Hz, were particularly popular in the mid-1980s, when spot welding robots had a limited carrying capacity of 60kg. Substantial weight saving could be gained by using a medium frequency transformer, thereby allowing the use of powerful, but light, welding systems. However, by the late 1980s robot motor technology had developed at such a rapid pace that robot systems became available which could carry up to 150kg. It is only recently, with the increasing use of aluminium in vehicle bodies combined with recent developments in the technology of medium frequency, which has meant that very acceptable, costeffective solutions are available, that medium frequency transformers have once again become popular and are being used in volume. 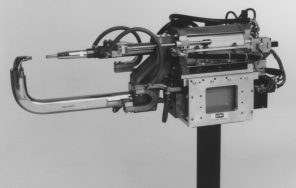 Since medium frequency guns use DC current, considerable advantages can be offered to the user not least in the improvement of weld quality. This is particularly relevant to aluminium where it is necessary to apply welding heat very quickly. With a medium frequency gun as the heat is applied continuously, weld times are short.

This contract for ten welding guns is the third project that Portable Welders has undertaken for Chrysler in Mexico with the company having supplied more than 140 manual and robot guns to date, Initially, Chrysler had PW guns on trial for three years, having previously always used "conventional" overhead transformer guns. Prior to specifying PW equipment the automotive manufacturer had also tested other companies' integral transformer guns, including an air/hydraulic weld system, which were found to be too slow for the required production speeds. PW guns were specified by Chrysler not only because of their speed but also because of their robustness and the high level of spares and support which were made accessible during the assessment phase. Portable Welders is finding that Chrysler Mexico's trend towards using the integral transformer spot welding gun is a trend, which is being reflected by automotive manufacturers worldwide.