ABB Flexible Automation has delivered outstanding levels of productivity, quality and cost savings to a UK aluminium foundry with the installation of its advanced IRB 6400, IRB 4400 and IRB 2400 industrial robots (see Plate 5).

The capabilities of the ABB robots has led to the foundry, part of a leading international casting manufacturer, initially specifying ten foundry robots for machine tending and deburring cell operations. This will soon increase to 14 when current orders are fulfilled. 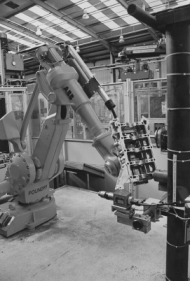 Specifying ABB Flexible Automation products is about achieving competitive advantage for the customer and the installed robots have done just that. "The robots in the deburring cells are saving us a lot of money and giving very good quality", says the finishing shop supervisor at the plant. "Removing flash and burrs from complex automotive castings is a difficult task but the ABB robots are doing an excellent job."

At a stroke, laborious, labour intensive and uneconomical manual deburring operations have been replaced with the power and flexibility of the robot. "It was an onerous and difficult task for the operators and costly in time and money", comments the project manager for installation of the deburring cell. "Now with the robot cells we are achieving much higher levels and consistency of quality that the company demands."

The first cell to be commissioned is used for processing engine bedplates and sump bodies. Cells two and three, which are still working up to full production, are for deburring transmission casings and clutch housings.

The initial three cells are equipped with IRB 400 foundry version robots, while the fourth cell, due for delivery shortly, will use an IRB 2400 robot for the deburring of complex cam carrier parts.

Operation is similar for all cells. Castings are loaded on to the "dead" side of a rotary indexing table. The robot then picks up the casting from the "live" side of the table, and takes it, in turn, to a number of machining stations. At each station, the robot manipulates the casting around a cutting tool to remove flash and burrs, finally depositing the finished casting onto an output conveyor.

The three cells are identical in layout, but differ slightly in the number of castings accommodated on the indexing tables and the number of machining stations.

The indexing table in cell one has jigs for four castings on each half, allowing a total of eight parts to be processed or loaded at any given time. Its four machining stations are equipped with fixed position tooling, comprising a pneumatic driven rotary burr, milling cutter, abrasive disc and drill.

The robot manipulates the casting and forces it against each tool. Each tool is compliantly mounted under adjustable pneumatic pressure to compensate for variations in burr and flash size. This calls for a high degree of dexterity, using the full six axes of the robot to ensure the casting is held against the tool at the optimum angle. Dexterity is particularly important when removing the flash from around half-bearing inserts in the bedplate, the milling cutter having to maintain a constant angle to the semi-circular edge of the bearing.

The cell incorporates a specially designed tool breakage monitoring system, which supervises the availability of cutting inserts, as well as a probing station that inspects the sump body for flash. If the flash has not been fully removed, castings are deposited onto a reject chute for remedial work by the operator.

Table jigs accommodate both bedplate and sump body castings with no adjustments. To switch from one casting to the next is swift – requiring only an exchange of the robot gripper and selection of the relevant program.

The first cell is an unqualified success, having been fully operational since November 1998, deburring on average 400 engine bedplates or sump bodies per shift, fulfilling just part of the ABB philosophy to make its UK partners much more competitive, beating off offshore competition.

ABB Flexible Automation has established strong links with this foundry and the close working relationship has allowed ABB to tailor the robots precisely to meet customer requirements in both casting and finishing shops. The customer's satisfaction with the service can be judged from the repeat orders which have been placed.