A fully automatic injection moulding line for the production of pulleys – track wheels running in bearings for belt systems on cars – has been developed by Engel Automation Technology for the Dutch enterprise Axxicon (see Plate 2).

Axxicon is the worldwide leading manufacturer of moulds for CDs, Smart Cards and Telecom and is one of the most important manufacturers of high quality plastic transmission components for the automotive electro-mechanical systems, for copiers, fax devices and printers. 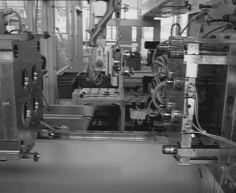 With the line coming from Engel Automation Technology, a large variety of pulleys can be produced. For these reasons it has also been conceived for a rapid mould change. The automation solution from Engel runs during the eight-hour shift operation completely without operating personnel.

The production of pulleys is a very demanding and labour intensive process, with regard to the high precision, the critical temperature range and the wear resistance to be achieved. Therefore Axxicon aimed to automate this complex production process, where some factors had to be carefully considered.

As the produced prefabricated parts work in employment with up to 15,000 revolutions per minute the "run-out" is very critical, Engel had to ensure gentle treatment during the handling by the automation in order to prevent damage of the bearings. The inserts have to move directly from the transport containers into the production process. The space requirements had to be kept as small as possible.

In close co-operation with Axxicon, the engineers of the Engel Automation Technology have developed a concept which has corresponded to all requirements.

The parts are loaded onto a large buffer conveyor belt, which possesses the number of inserts required for eight hours. From this buffer belt the parts are transported onto a second conveyor belt where the bearings are presented at the different cavity distances by guiding plates.

The second conveyor belt brings the bearings to the presentation table where they are taken up by the Engel ERC robot 1 and are insert-placed into the fixed mould half. The prefabricated parts taken from the ejector half of the mould are placed afterwards on an intermediate depositing table by the ERC robot 1. Afterwards, the ERC robot 1 can move to the reception again in order to fetch the next parts.

The ERC robot 2 is necessary to deposit individually as many parts as possible in a box. It fetches the parts from the intermediate depositing table and places these in one of the two boxes provided by the box server. Due to the limited available space, boxes are stored at different levels in the box server. The empty boxes are loaded at the lowest level and are brought upwards to the filling position by a lift. After filling, the full boxes are delivered to the central level from where they can be unloaded. In order to be able to transport the over-moulded parts as gently as possible, cardboard intermediate layers are inserted between each layer, also by the ERC robot 2.

With this intelligent solution from Engel, Axxicon has been able to automate a previously highly intensive labour process and has greatly improved output and quality. To date three machines have been supplied.