The advantage of lightweight, rigid manipulators from BTM is that they are standard, off-the-shelf devices which can be easily reconfigured if the component and/or process changes. They incorporate a shock sensor which automatically resets or shuts down the system if the workpiece crashes due to an obstacle in its path or incorrect programming. 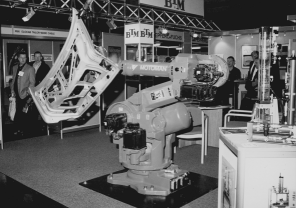 Benefits of Motoman's latest "UP" robot series are equally noteworthy. Each model has a significantly larger working envelope than its predecessor and all feature a flexible conduit which routes services from the base to the upper arm, eliminating trailing hoses and cables. Direct drive on all axes promotes speed, accuracy and reliability of movements.

There are eight models in the range with load capacities from 6 to 400kg. As with all Motoman robots, they enjoy simplicity of programming and smoothness of action together with the backing of a wide range of supporting software. Positioning accuracy is ±0.2mm.

Alongside the launch of its UP series, Motoman has introduced a new, 27-axis controller, the first to be capable of handling three six-axis robots and synchronising their movements with a variety of other equipment such as gantry systems, linear tracks and rotary indexers.