Strength where it matters

Strength where it matters

An increasingly popular fastening system within the automotive industry, the Fastriv self-pierce rivet system was chosen by Magna Seating for its security and versatility which is critical for integration into Magna's production systems (see Plate 3).

We value the extra security given by the Fastriv joint. Nuts and bolts are standard industry fastening for this kind of application but a screw thread can work loose through a number of factors. Due to the integrity of the permanent joint, Fastriv provides the security and durability to alleviate the problem.

At Magna Seating, Robotic cells work on assembly, with two different variants of product being assembled off a two bay interactive fixture - one bay is actively assembling while the other one is being loaded. 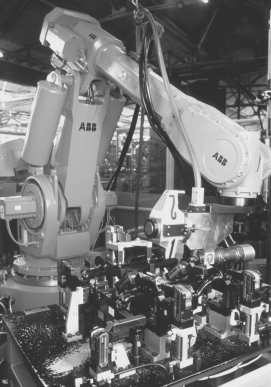 The Fastriv system is ideal for integration into a robotic cell as the unique blow feed system allows for continuous production without the downtime necessary with, for example, belt feed systems which need replacing when the rivets are exhausted.

The Fastriv mounting system can be worked flexibly and has been designed specifically to integrate with the latest manufacturing technology.

A dual anvil module to accommodate the two variants of seat bracketry has been installed into the Fastriv machine head which allows the operator to manually select the required anvil. An automatic sensing system informs the robot which seat assembly is to be fastened.

Another advantage of the system is the ability to colour the rivets to match the component, hence avoiding further operations.

For increased flexibility, Fastriv self-pierce rivets can also be used with hand held rivet guns where this approach offers more effective integration with the production system.

Fastriv offers unusual scope to the industrial designer and manufacturer, not only through its strength and its versatility in production systems but also through its ability to fasten securely a wide variety of dissimilar as well as pre-coated alloys and high strength steels unsuited to a welding operation.

The exceptional performance of Fastriv self-pierce rivets enables it to join sheet materials of up to 8mm total work thickness.