Positioning system provides pinpoint accuracy when the heat is on

Positioning system provides pinpoint accuracy when the heat is on

A precision tracked motion system from Güdel UK has been specified as a key element in a custom-engineered installation to automate the production of de-icing systems on GKN Westland EH1O1 helicopter rotor blades - thanks to its ability to position a suspended 250kg industrial robot with pinpoint accuracy and repeatability over a 10 metre run (see Plate 2 ).

Previously, de-icing systems were applied manually by spraying strips of metal onto the 7.5 metre long glass reinforced plastic blades. Today, the Güdel equipment at the heart of the new installation is used in conjunction with a Sta«ubli Unimation RX130 robot to streamline the whole process from surface preparation, marking out and spraying, through to final component trimming. The elimination of human variables has not only enabled the new system to improve coating thickness consistency - with a marked reduction in re-work time and costs - but also to achieve a significant increase in production throughput. 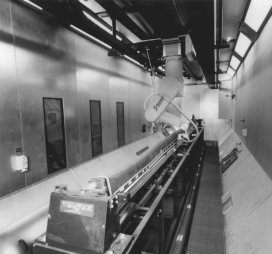 In operation, the installation's robot initially blasts the moulded blade with silicon carbide grit to both prepare and key its surface. After a tool change, the robot undertakes the metal spraying operation over designated areas of the blade. Finally, it selects a polycrystalline diamond (PCD) tipped router to trim the edge to a dimensional tolerance of +0.25mm.

According to AEA Technology's Peter Jackson:

Each blade incorporates a complex "burp" profile design. These too, must be held to close tolerances. Additionally, high manufacturing repeatability and consistency in the de-icers' sprayed metal surface must be maintained in order to minimise the risks of localised variations which could cause significant hot or cold spots over the blade's surface.

When working such large components to this precision, we even had to take process temperature variations into consideration in the installation's design, he continues. By locating the robot's microswitch datum at the centre of the track motion system's 10 metre run, we have effectively eliminated thermal drift - enabling overall repeatability of better than 0.03mm at any point along the blade's surface.

Another major concern in the selection of the positioning system was the operating environment associated with the grit blasting operation. However, after viewing an equivalent Güdel installation at Cosworth Engineering's foundry in Worcester, AEA Technology was confident of its ability to cope with the stringent operating requirements of the de-icer application. This performance was subsequently confirmed through pilot trials of the robot and track system combination prior to final system integration.

The fact that all the track motion modules come from Güdel's standard range has proved to be a further bonus, helping AEA Technology to ensure that the new manufacturing system has been completed, installed and commissioned at the customer's site on time, as well as on budget.

The TM series track motion modules selected for this demanding application represent just one of a range of precision linear and drive technology solutions offered by Güdel. Designed for use with industrial robots from all leading manufacturers, TM series modules are geared to the requirements of machine tool, automation and special machine building applications. The company's complementary multi-axis gantry loading equipment, automation machinery and press transfer units are ideal for installations requiring high speed, high acceleration or precise positioning of components weighing up to several tonnes. They are widely employed for high volume metal working, assembly or manufacturing applications - in particular within the automotive, aerospace, defence, electronics and process sectors.

A complete spectrum of modular components, ranging from precision drive pinions, racks, rollers, to carriages and guideways is also available and can be supplied in a variety of materials and surface finishes to combat corrosive, aggressive or hazardous operating environments.