Fanuc have launched the world's largest palletising robot, with a massive maximum payload of 400kg. Marketed in the UK by Coventry based Fanuc Robotics, the M410iWW, as it is designated, can move at surprisingly high speed considering the mass involved (see Plate 10).

It can perform up to 730 standard cycles/hr. This comprises a 400mm lift, 2,000mm horizontal traverse followed by 400mm down. With such a lifting capacity, it is the ideal solution for "complete layer" lifting of cases of bottles and cases of food stuffs.

Other applications include large wood panels, steel and wire bales as well as major automotive sheet metal panels such as the under body pans. 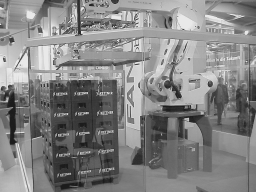 The robot arm sits on a pedastal with the J1 axis rotating through 360° for all round access. Rather the free-standing, the control system is contained within the pedastal which greatly simplifies shipping and on-site installation.

There is a hollow wrist mechanism at the end of the arm where pneumatic and electrical services to end of arm tooling can be routed. Internally carried services are better protected from chaffing or twisting.

The increased capacity has been achieved by optimising the arm design. It is twice as rigid as the previous model without any increase in weight. This can be translated into load capacity rather than increased mass of the moving parts of the robot itself.

The robot follows the same configuration of other Fanuc models with an over hung arm. This means the robot always accesses the in-feed or pallets from the upper surface. With a general purpose articulated robot there is always the risk of collision with the front of the pallet, when reaching to the back. The Fanuc M410iWW configuration eliminates this possibility.

The robot can utilise the Fanuc Pallet Tool software that allows the operator to optimise palletising patterns based on the pallet size and box size. A graphical user interface enables the operator to review stacking options without any specialised programming knowledge.