As an alternative to fitting conventional gaskets to seal the mating faces of vehicle engines, Ford finds that a quicker and more economical method is to lay down a bead of sealant by robot. Such systems are already operational on the Zetec, Lynx and Puma engine lines at Bridgend and Dagenham (see Plate 1). All of them are based on six-axis, computer-controlled robots supplied by Motoman Robotics (UK), Banbury, and involve sealing the oilpan and front face.

One operation, for example, is the application of a liquid gasket to the ladder frame of diesel engines prior to fitting the oilpan. The cell is based on a Motoman SK16 robot with a seventh axis to operate the Loctite sealant application unit mounted on the wrist. The robot controller oversees all operations within the cell, including the powered roller conveyor which carries engines on platens. 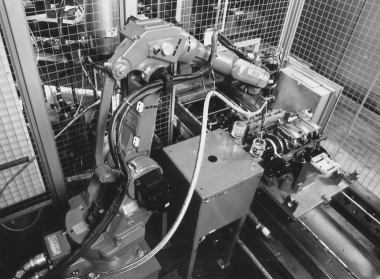 A three-position indexing unit acts as a platen stop and lift to fix the height of the engine in the Z axis during sealant application. However, as the engine's position is not fixed in the X and Y axes on the conveyor, a Renishaw probe is used to touch sense the orientation of the block and relay the information to the robot.

When an engine enters the cell, an inductive data tag fitted to the underside of the platen transfers identification data to the controller over a radio frequency link. Identification and touch sensing of block position are carried out simultaneously to keep the cycle time within 24 seconds.

Provided that the component is cleared for liquid gasket application, the robot guides the nozzle around the ladder frame, laying down a bead of sealant which is monitored for uniformity and absence of air bubbles. The smoothness of operation of Motoman robots together with the power of the controller were instrumental in the company being chosen as the supplier for these applications.

The oilpan has to be fitted within four minutes of the sealant being applied to the ladder frame, otherwise the curing process will be too far advanced. The next machine in the line uses this information to determine whether or not to carry out its operation on the engine. The success or otherwise of bead application is stored on the data tag, together with the date and time, before the platen leaves the cell.