A new range of industrial robots, just launched by Mitsubishi Electric, defines a new class of flexible automation solution for general production and precision assembly tasks. The first of these, the RP-1AH weighs only 10kg, has a footprint such that it can sit comfortably on a standard mousemat and is no bigger overall than a domestic cappuccino machine (see Plate 5).

The working envelope of the arm is 150mm wide, 105mm deep, 30mm up and down, and the end effector is free to rotate 200 degrees in either direction. Maximum speeds are 1,700mm/s horizontally, 800mm/s vertically and 3,000deg/s in rotation. RP-1AH can accommodate payloads of up to 1kg. Two further models with extended working envelopes will be released shortly: the RP-3AH and RP-5AH can handle payloads up to 3kg and 5kg respectively.

The RP-1AH uses four 100W AC servomotors to drive a unique five-jointed arm which articulates in the horizontal plane in the manner of a pantograph. The motors are all located in the main body of the robot, transferring movements to the arm-joints by rigid gears and mechanical assemblies, so that there are no overhung loads in the arm. Vertical positioning is achieved through a very high speed helical drive at the centre of the arm assembly. Absolute encoders are used for position detection and each motor has a brake for precision and position holding. 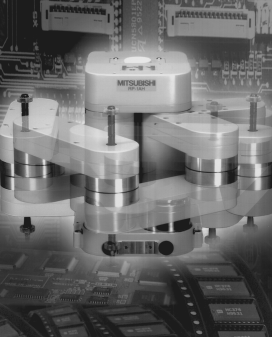 The performance specification will lead to the automation of tasks currently considered too "fiddly" for anything but painstaking manual processes. According to Simon Cassar, Mitsubishi product manager for Robotics, "We expect the electronics industry to be our best market, particularly the fast growing manufacture of mobile telephones. The strength of this new class of robot is its capability of handling small parts in general and the surface mounting of electronic components".

He adds "Robots like the RP-1AH have a key role in the future of flexible manufacturing. Some assembly lines for rapidly evolving product designs are changed every few months. Under these circumstances, maximising the use of the RP-1AH by redeploying the asset is merely a matter of removing four bolts and reprogramming the robot". Further applications are the assembly of hearing aids and other on-body medical equipment, the building of precision mechanisms such as watches and timers, and the accurate dosing of complex multi-ingredient formulations into test tube arrays.

At the heart of the associated controller unit, designated CR2-532, Mitsubishi's engineers have used a 64 bit RISC processor capable of simultaneously controlling four axes of motion in Cartesian, circular interpolation and many other movement profiles. Set up and control is via a PC or dedicated unit for which there is an RS232 port, or via manual data entry using the optional teach pendant. The memory will hold nearly 100 separate programs, each of up to 5,000 steps with as many as 2,500 positions per program. Subroutines, compliance control and multi-tasking are all possible.

The software has been developed to a high level, so users simply define what they want the robot to do rather than having to break this down into individually defined movements. Self-tuning is built in, so there is no requirement for extended commissioning periods. Mitsubishi is predicting set up times of a few hours, compared to the several days usually associated with bespoke robot/automation solutions.