The latest addition to the R.A. Rodriguez range of automation system modules for pick-and-place applications provides compensation of positioning misalignments in the x-y plane. The IPR KA lateral alignment device (see Plate 2) protects its host mechanism from wear and prevents wedging or jamming of workpieces during load and off-load.

The movement of this new compensation element is implemented through linear guidance which is based on the compound slider principle. Compensation is accomplished without force and can take place two-dimensionally in the x-y direction. The fixture can also be locked in a central position using a double-action pneumatic cylinder. 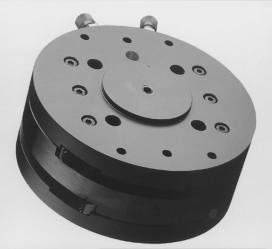 Eight models complete the KA range which respectively permit maximum movements from 2-300Nms, pressure forces from 150 to 4,000N and recommended payloads of 0.3-200kgs. Each provides tolerance compensation with position offset up to 25mm.

A range of robot load limiters are also available for applications which may encounter shock loads.

The KA lateral alignment device is designed to be compatible with the IPR Z-axis compliance wrist which is generally used to compensate for tolerances in parts assembly. As with other IPR functional modules the KA is available as a standard product or may be factory-customised to meet special application needs.