Compared with other factory automation products, the global motion control market is extremely fragmented. Although the major automation companies have a significant presence - Siemens leading the way with a 13 per cent market share - an astonishing number of smaller companies have large shares of their national or regional markets (see Figure 3).

However, according to a new report from market analysis firm Datamonitor, new forces are changing the structure of the market, with consolidation sweeping up many of the well-known motion control brands into the global players. 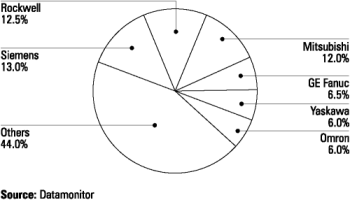 The report Motion Control in the Leading Industrial Markets includes individual analysis of the top 11 markets for motion control - which together account for 90 per cent of the $3.6 billion global market. Key findings include:

However, the end-user market is becoming even more diverse and now encompasses travel and service industries (e.g. baggage handling and postal delivery) process industries and manufacturing industries. Even the entertainment industry can be an end-user, for example in the control of theater scenery and lighting. In addition, there are now indications that the end-user is becoming more likely to implement a motion control application directly.

Of the 11 key markets featured in the report, the UK in particular has experienced increasing use of variable speed and universal drives in motion control. The UK market is characterized by relatively high loads and higher power-outputs of motion systems. A second factor is that the UK has a higher custom design sector than elsewhere; primary sales to specialist motion systems integrators are a strong feature.

The fastest growing sector by type of controller packaging is the PC-based and bus-based systems sector, which has grown to 15 per cent of the total market in 1999 from less than 10 per cent in 1995. Overall PLC-based systems are losing market share particularly to bus-based motion control systems.

Companies in the motion control industry have in the past often experienced a typical cycle of development. New motion control suppliers and systems integrators are often formed when a group of employees split from an existing company when it relocates, reorganizes or makes management changes. Many of these companies look to exploit niche market opportunities. If they are successful they may in time be taken over or bought out by larger concerns. It is not unknown for this type of company to be reabsorbed by their original parent. Other new market entrants are created when suppliers already established in a complementary market expand their scope of supply. These companies are more likely to go all out for a significant national market share or world ranking, depending on the status and ambitions of the founding business.

However, over the last few years new factors have changed the structure of the market. Consolidation has swept up many of the well-known motion control brands into the global factory automation companies. Others are being absorbed into pan-national groupings by major holding companies (e.g. Danaher and Invensys). Small companies entering the market are now more likely to be experts in new automation technology, rather than ex-employees of motion control specialists. These companies are changing the technology base of the industry and are themselves becoming targets for larger companies in factory automation or motion control.

Six leading companies have relatively high shares of the global market, by virtue of their sales presence in every market and broad product ranges covering nearly every market sector. However, compared with other factory automation products (such as PLCs or even variable speed drives), there are an astonishing number of smaller companies with significant presence in their national or regional market or in the market for a limited range of products.

According to Datamonitor, Rockwell, Mitsubishi and Siemens vie for global leadership in motion control. Mitsubishi was world market leader but the slow Japanese market has allowed both Siemens and Rockwell to overtake it. Rockwell has a dominant position in the USA, but trails in Germany and Japan. Siemens is currently global leader - just. Its dominant position throughout Europe, strong position in the USA and wide coverage in the smaller markets, together with a strong new product in the bus-based systems sector, presently gives it the edge over competitors.