The Modgal factory, located not far from Golan Heights in the northern part of Israel, specializes in casting cast iron fittings for water and electrical piping systems.

The manufacturing process begins with the casting of cast iron joints, after which they are separated, cleaned and galvanized. Next, the parts are machined at an automated tapping machine which handles on average one part every five seconds.

A variety of parts in many different sizes are manufactured including "L", "q", "X" and "straight" shaped fittings for both water and electrical piping systems.

Modgal has several tapping machines on the work floor; each one is able to handle about 20 different products. Each product requires individual setup and tooling including chucks change. 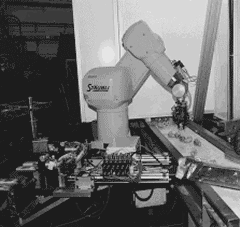 The first conveyor, serving as a loading silo for about 500kg of parts, feeds into a second elevator type conveyor, acting as the first stage of separating singulator, then feeds the parts to a third conveyor running at a higher speed. This opens a larger gap between the parts. Finally, parts are fed to a fourth conveyor, on which the camera is mounted.

From this conveyor, the robot picks up parts. Any part which has been skipped by the robot will feed back, on a closed loop, to the first conveyor for reprocessing.

The whole cell (robot, vision, conveyors, and tapping machine) is controlled by a PC, with a user-friendly menu driven software based on the Windows environment.

If there is no part under the camera's field of view, the PC will instruct the conveyor to advance until parts are found. The vision system discriminates between bad parts and good parts, and will instruct the robot to pick up only valid parts.

A second camera is installed just above the tapping machine chucks to verify correct placement. Any part that is wrongly fed into the chucks is rejected, and the robot will replace it with another one.

The system meets the machine full speed and feeds parts at a rate of five seconds per part.

The product type being manufactured is changed every several days. It takes about five minutes to replace the product including selecting the product type from the PC menu and replacing the robot's gripper fingers.

In summary, despite the high level of computation technology used in the system, it is very user-friendly, was very well accepted on the production floor and is being operated by the same staff who formerly ran the tapping machine.

The system is highly successful, and Modgal is planning to implement it on all of their production lines.

The system could be adapted to any foundry or any similar machine feeding requirement around the world.