Toshiba has added a yet more compact variant to its HSP Series Scara robots in the shape of the SR-424HSP. With a total arm length of just 420mm, this robot can work within an area the size of a pallet (see Plate 6).

By bringing four-axis, multitasking capability and 32-bit control to a robot with an arm height of just 475mm and overall weight of just 21kg, Toshiba has created a superb pick-and-place solution that can help reduce the overall size of a wide variety of machines. 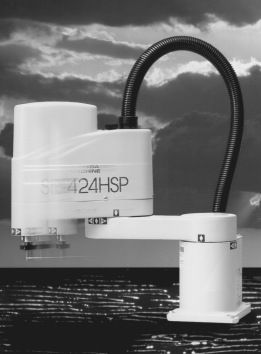 Plate 6A new addition to the Toshiba HSP Series Scara Robots is the SR-424HSP. WIth total arm length of 420mm it can work within an area the size of a pallet

This robot, like all Toshiba SR-HSP series robots, is extremely fast and accurate, offering rotational speeds of up to 480°/sec and repeatability accuracy to within ±0.02mm. Able to carry loads of up to 3kg, the SR-424HSP will bring particular benefits to precision packaging applications such as pharmaceutical products, electronic component insertion and small component machining systems.

The speed of the HSP Series robot comes not just from its physical capabilities. The Toshiba SR7000 robot controller is capable of simultaneously processing input and output signals during robot motion, so no time is wasted waiting for signal processing to be completed. The controller uses absolute encoder feedback rather than incremental signals, thereby obviating the need to implement a zero return on start-up following a shut-down.

The 32-bit controller is capable of controlling up to five axes simultaneously, with options for PTP, short-cut, linear interpolation and circular interpolation motion modes. With a total memory capacity of 6,400 points (12,800 steps), the controller also offers a multitask function, allowing a maximum of four tasks.

The mechanical movements of the Scara robots are controlled using Toshiba's own revolutionary digital servo motors, amplifiers and motion controllers. There are also teach and play features available for set-up.