When Airflow Streamlines wanted to improve their product quality, increase the through-put of their spraybooths, and update their eight year-old Northampton facility to comply with environmental legislation, they invested in an Automated Cab Painting System from Warwick-based Inlac (UK).

Airflow Streamlines are the largest independent cab manufacturers in the world, and have recently been awarded QS 9000 status as part of their continuous improvement strategy. They specialise in the manufacture and final finish of industrial safety cabs for customers such as Caterpillar, New Holland, ERF and JCB. Their new cab painting system includes two Dürr Ecopaint robots and three new spray booths. Andy Kirton, Contract Engineer for Inlac (UK), said "With their seven-access manoeuvrability and intricate spraying capabilities, the robots are able to paint both the interior and the exterior of the cab, matching current manual spray operations." The robots' efficient spraying process reduces paint usage, and the lower exhaust emissions coupled with the use of compliant materials ensure the painting process meets environmental requirements ( Plate 2).

One of the most important aspects of the Dürr Ecopaint robot is the adjustable spray gun. As a manual spray gun has a fixed size pattern, the amount of material sprayed is the same whether the area to be covered is six inches or one inch. But the fan pattern width of the Dürr Ecopaint robot can be reduced or made wider to suit the item being sprayed. Fan pattern reduction eliminates a substantial amount of paint waste. 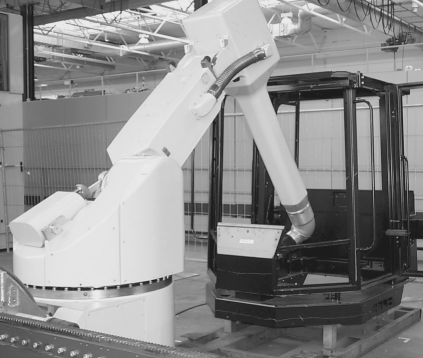 Plate 2Seven-access manoeuvrability and intricate spraying capabilities allow the robot to spray both the interior and exterior of the cab, matching the current manual spray operations

With the robots capable of spraying up to 800cc of paint, double that of a manual spray gun, the material can be applied in one pass. And at one meter per second, the pass speed itself is faster than manual, resulting in an increase in productivity from 11 to 14 units an hour. "The repeatability of the robot ensures a consistently high quality finish", says Andy Kerr, Airflow Streamlines' Project Co-ordinator, "which eliminates defects in paint application and reduces the inspection process."

Initial ROBCAD studies using computer drawings and 3D simulation were successfully conducted to prove the process capability prior to concluding the final process layout designs. Inlac's Modular Build capability at the Dürr Group's facility in Biegitheim Germany allowed a live trial simulation to be run of the spraying process, which can identify and eliminate possible application problems prior to on-site installation. Modular Build lessens the amount of testing that needs to be done on-site by conducting real world tests on the actual equipment.

Phase I of the project involved removing the old equipment and preparing the new mechanical booths through the Christmas period. Phase II, installation of the robots, is due for completion by the end of February, and production trials are to begin running from March on.

As the General Industries Division of the Dürr Group, Inlac (UK) works with suppliers to the automotive industry and with non-automotive sectors to design, manufacture and install paint finishing system solutions.