For the first time in its 15-year history the Golden Robot Award was presented to two people in 1999, recognising their equal contributions to the expansion of robot applications through development of the parallel robot concept. Professor Reymond Clavel receives the Award as the inventor and champion of the Delta robot while the Award to Karl Erik Neumann is for his innovation and entrepreneurship in bringing the Tricept robot to the market (see Plate 1).

In coming to their decision, the jury recognised that the Delta and Tricept parallel robot concepts are creating major breakthroughs in robotic applications. The fast and accurate pick-and-place Delta is opening new opportunities in the consumer, food and pharmaceutics industries, while the fast and stiff Tricept robot has attracted the interest of many leading companies in the automotive, aerospace and machine construction industries. Both give opportunities for robotics to achieve increased efficiency in complex manufacturing. 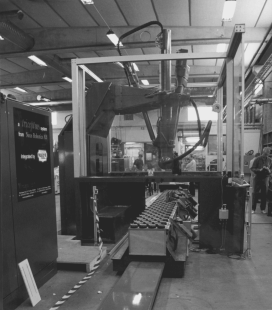 Reymond Clavel is Professor at the Institut de Systèmes Robotiques of the Ecole Polytechnique Fédérale de Lausanne (ISR-EPFL) in Switzerland and since 1993 Director of this Institut. His research on parallel robots is centering on high cycle rates with accelerations up to 50g and high precision control to resolutions of less than 0.1 micron. The concept of the Delta robot emerged from such activities in the 1980s, but Professor Clavel's enthusiasm did not stop there. He has actively pursued commercialisation of the Delta robot and, as a result, it has been taken up by a number of international companies.

The Swiss company Demaurex Robotique & Microtechnique was the first robot manufacturer to take up a licence for the Delta concept. Others have since been granted to ABB Flexible Automation, from which the FlexPicker has been developed, and to Hitachi in Japan, which has applied it to a precision drilling machine now on the market, as well as to Elektra for its Surgi Scope in the medical field. Professor Clavel's support in creating these new and successful applications for the robot in industries with large volume potential was a key consideration of the jury in making its judgment for the Award.

Karl-Erik Neumann is President and founder of the Swedish Neos Robotics, manufacturers of the Tricept robot. He built his first prototype Tricept in 1989 but the computer technology of the day was insufficient to allow full control of the complex parallel linkages mechanism. But he had the foresight to believe that there would be a market demand for a robot with the stability and press force capability of the Tricept in true assembly applications. His patience was rewarded as computer technology advanced and, in 1992, access to the world's first multiprocessor-based control system from Italian company Comau enabled the Tricept to become a commercial reality and the Neos company was founded.

The original Tricept, the TR600, was developed for precision assembly but soon it was discovered to be also outstanding for light milling and drilling applications where flexibility was paramount. Over 100 TR600s have been sold since the first sale to IKEA for assembly work in 1993, and its success as a machine tool robot by customers in the aerospace and automotive industries encouraged Neos to develop a larger second generation Tricept for heavy machining and precision assembly. The Tricept805 was launched in 1998 and even before the first one was built, two had been sold, one to Boeing for accurate drilling and milling of aircraft floorbeams, and the other to Preston Engineering in Australia to machine holes in truck doors and chassis.

In making its judgment for the Award the jury were particularly persuaded by the enthusiasm and perseverance exhibited by Mr Neumann in successfully stimulating great interest from industrial application experts for the use of the Tricept in new areas of complex machining operations.

Professor Clavel and Mr Neumann will receive their Golden Robot Awards at a ceremony on October 27, 1999 in Tokyo during the 30th International Symposium on Roboties (ISR). Each Award consists of a gold-plated model of the world's first commercial electric drive robot, the ABB IRB6, mounted on a base of rare birch-wood plus an honorarium of US$2,000 and a Diploma with the Jury's citation.

The Golden Robot Award is sponsored by ABB Flexible Automation, the world's leading manufacturer of robots and robot systems, and presented annually during the ISR. It is open to deserving individuals throughout the world who have contributed to the development of industrial robot technology through activities in a university, an institute or as a robot user.