The spline and ramp functions of the MINT motion control language have helped Dangel Robots & Machinery (Bedford, USA) to build a highly efficient molten brass crucible handling system. The new system automates movement from furnace area to a secondary workstation, removing the foundryman from the vicinity of molten metal, and increasing speed compared with the previous process - thereby maintaining heat and enhancing the quality of a consequent parts production process.

This automation project demanded as high a speed of travel as possible, while ensuring that the molten metal - which is half an inch from the top of the crucible - does not spill. It also involves navigating around a large I-beam pillar obstacle on the factory floor. Dangel Robots, and their consultant motion control specialist Craig Deady, provided a servo motorbased solution with two axes of motion. The first axis controls the X-axis carriage. A second swing arm rotates the crucible during movement, to optimize speed during its non-linear path (see Plate 3).

Deady chose to implement the system using Baldor Optimised Control's NextMove BX motion controller, primarily because of the flexibility of its associated MINT programming language. "MINT's spline commands allowed me to define a curved path which controls movement smoothly during transit to eliminate spillage", says Deady. "I also used ramp functions to build up speed as quickly as possible throughout the travel to minimize heat loss." 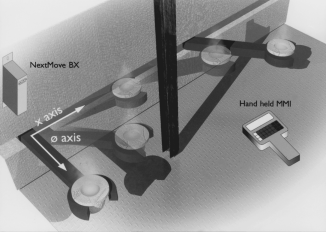 Deady considered other controllers for this project, but rejected them because of limitations of control such as a lack of acceleration and deceleration commands - which would have resulted in jerky movement. Cost was another major concern, with the NextMove BX coming out on top because it provided a complete standalone solution with case, power supply, and I/O. In addition to on-board I/O, Deady exploited NextMove BX's CAN interface to connect to the operator interface and display mounted in a hand-held pendant.

Even though the Baldor controller offered all these features, it still lacked one important facility for Deady: the ability to respond to a "live man's handle" signal during the movement sequence controlled by the spline function - a safety feature applied to many of Dangel Robot systems. Baldor was very quick to respond to this requirement. "Most companies will not even talk to you about custom software", continues Deady. "Baldor's Optimised Control's European R&D facility gave me some trial code to solve the problem in a couple of weeks, and the final software a few weeks later - that is phenomenal service?"